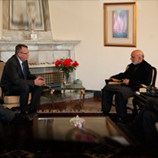 Stressing the principle of "shared responsibility" as the only effective answer to the global menace of Afghan opiates, Mr. Fedotov highlighted that the Afghan Government and provincial governors had a crucial role to play. Strong, sustained political will at all levels of the Afghan leadership would be an essential part of the solution.

Mr. Fedotov said, "I welcome the fact that the Government is working hard to counter the narcotics trade in the country, but there is also a need to do much more. We must build the necessary political commitment, as well as practical action, to have tangible successes against the criminal networks that traffic in death and misery."

Afghanistan produces some 90 per cent of the world's illicit opiates; the UNODC Afghan Opium Survey 2011 pointed to a dramatic 133 per cent increase in the total farm-gate value of opium production compared with 2010, higher prices for the crop and a flourishing drugs trade.

Having launched the country programme for Afghanistan for the period 2012-2014 while in Kabul, Mr. Fedotov assured President Karzai that the Office remained committed to ensuring continued and tailored support to Afghanistan. Mr. Fedotov underscored the timeliness of the UNODC country programme, which was aligned with the handover of power by the International Security Assistance Force.

The country programme represented a concrete step towards strengthening the capacity of the Government to fight drugs and crime, which would pave the way for long-term development, he said. Its focus would be on providing alternative livelihoods to households dependent on illicit crop cultivation; reducing drug demand; and preventing and treating drug-related HIV.

At the same time, the country programme would contribute to the wider objectives of the regional programme for Afghanistan and neighbouring countries for the period 2011-2014, which is a strategic framework for UNODC and its multilateral partners to respond effectively to drug trafficking and organized crime.