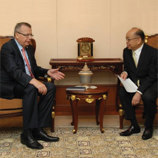 Mr. Fedotov, who touched down in Thailand yesterday at the start of an official 12-day mission to the region, made his comments today when he met the Thai Deputy Prime Minister and Minister of Foreign Affairs, Dr. Surapong Tovichakchaikul, at the Thai Ministry of Foreign Affairs in Bangkok.

Since 1971, Bangkok has been UNODC's base of operations in the region and is currently home to the UNODC Regional Centre. Mr. Fedotov's visit comes at a time when South-East Asia is under tremendous pressure from syndicates involved in all forms of transnational organized crime including the illegal timber trade, wildlife crimes, counterfeit goods, fraudulent pharmaceuticals and the smuggling of migrants.

During his mission Mr. Fedotov will travel also to Myanmar, Viet Nam, Lao PDR and Indonesia. In addition to reviewing the organized crime situation Mr. Fedotov will discuss a number of issues related to other UNODC mandates including anti-corruption, counter-terrorism and the spread of HIV linked to injecting drug use.

"The illicit manufacture, trafficking and use of opiates and amphetamine-type stimulants (ATS) are the two most significant illicit drug threats in the ASEAN region today. South-East Asia accounts for 50 per cent of the world's amphetamine seizures.  The region is the world's second largest producer of illicit opium poppy, after Afghanistan," said Mr. Fedotov.

The relationship with the illicit opium market in Afghanistan is a worry. "With constant global demand for illicit opium, the recent production decline in Afghanistan will put added market pressure on South-East Asia to produce more," said Mr. Fedotov. "None of this is good news for the region."

Mr. Fedotov recognized Thailand's effective chairpersonship of the ASEAN Senior Officials Committee Meeting on Transnational Organized Crime (SOMTC) and, when meeting Commissioner General Adul, expressed the international community's appreciation of the Thai Royal Police's efforts to promote the fight against environmental crime as a key agenda in the ASEAN SOMTC.

With the Minister of Justice, Mr. Fedotov commended Thailand's leadership and political vision in the development of the Bangkok Rules (UN Rules for the Treatment of Women Prisoners and Non-Custodial Measures for Women Offenders) and the strong personal commitment of Her Royal Highness Princess Bajrakitiyabha to improve the conditions and treatment of women in prisons.  "The Bangkok Rules have become a humane symbol for treatment of female prisoners," he said.

Mr. Fedotov congratulated the Attorney-General for successfully hosting the recent Annual Meeting of the International Association of Prosecutors (IAP) and said UNODC supported Thailand's efforts to ratify the Trafficking in Persons Protocol of the UN Convention against Transnational Organized Crime. Ratification of the Convention will occur once the Bill on Combating and Suppressing Transnational Organized Crime, currently before the Thai Parliament, is passed into law.

Shortly after arriving in Thailand, Mr. Fedotov also had a working lunch with ambassadors from a number of foreign donor missions to discuss the need to address - and financially support - efforts to combat the worsening drug and crime situation in the region.

"East Asia and the Pacific are home to some of the world's fastest-growing economies and just under 30 per cent of its population. While economic growth and regional integration bring many positives, there is a dark underbelly to growth. Growth also provides opportunities for transnational organized crime to expand and threaten human security," said Mr. Fedotov. "It comes at a cost," he added.

Annual Meeting of the International Association of Prosecutors (IAP)