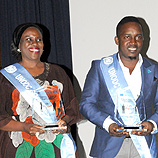 10 October 2012 - The Government of Nigeria, jointly with UNODC and the European Union, has launched a nationwide three-year anti-human trafficking campaign. Entitled "I am Priceless", the campaign is aimed at raising awareness about the reality, dangers and possible impact of irregular migration, as a consequence of either being smuggled or being a victim of trafficking in persons. UNODC also appointed two Nigerian celebrities, Joke Silva and Jude Abaga, as Goodwill Ambassadors to spearhead activities connected to the campaign, particularly among the young and vulnerable.

A 2009 UNODC threat assessment, Transnational Trafficking and the Rule of Law in West Africa, revealed that thousands of women are trafficked each year from West Africa to Europe in a multimillion-dollar criminal industry. With an estimated value of between $152 million and $228 million annually, the market sees a yearly inflow of between 3,800 and 5,700 women. It is estimated that West African trafficking victims, many of whom originate in Nigeria, comprise about 10 per cent of forced sex workers in Western Europe.

Speaking at the launch of the campaign in Abuja, Mariam Sissoko, the head of the UNODC Country Office in Nigeria, said, "Through this campaign, we aim to reach out to law and policy makers and other leaders for the adoption of policies and legal frameworks supportive of the fight against trafficking in persons and smuggling of migrants. We also want to sensitize communities and families who are often betrayed and deceived by people who make false promises of a better future for their children and relatives, within or outside of Nigeria. The more people are aware of these crimes, the more we will be able to put the perpetrators out of business."

Joke Silva, a popular director, producer and actress, will use her stardom within "Nollywood", the Nigerian film industry, and her passion as an advocate for women and children's issues to create awareness about the dangers of human trafficking. Joining her is hip-hop artist, producer, lyricist and instrumentalist Jude Abaga (also known as M.I., or Mr. Incredible), who will use music and the media, including social media and the local entertainment industry, to spread the message. 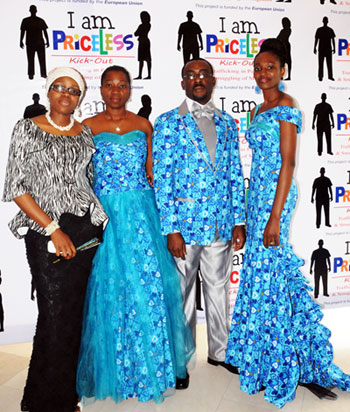 The campaign will organize grass-roots awareness activities, produce and disseminate advocacy materials, and arrange radio and television appearances and advocacy visits by the Goodwill Ambassadors to state governors, traditional rulers and secondary schools. Other activities will include town hall meetings, school dialogues and a nationwide poem competition.

The "I am Priceless"  campaign also supports the Blue Heart Campaign against Human Trafficking of UNODC. The launch included a "Blue Heart" fashion show and the unveiling of a customized Blue Heart fabric, Ankara, whose design features the blue heart, the international symbol that represents the sadness of those who are trafficked and the cold-heartedness of those who buy and sell fellow human beings. The fabric will be used in awareness-raising and prevention activities.

The slogan of the "I am Priceless" campaign is designed to communicate a sense of the value, self-worth and dignity of each and every human life and to instil a sense of empowerment to counter negative messages that trafficking victims or potential victims have experienced since childhood or following a trafficking experience.