UNODC to open a liaison and partnership office in Mexico 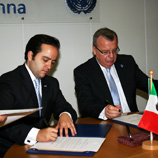 15 October 2012 - UNODC Executive Director Yury Fedotov and the Secretary of State of Mexico, Dr. Alejandro Poiré Romero, today signed a new agreement to boost cooperation between UNODC and the Government of Mexico in their ongoing efforts to fight transnational organized crime and drug trafficking. The agreement will see the establishment of a UNODC liaison and partnership office in Mexico, the first such office to be established by UNODC.

Mr. Fedotov said, "The signing of the agreement to reprofile our office in Mexico as a liaison and partnership office is an historical event. It is the first such agreement. I hope there will be others. The office will strengthen and promote UNODC work in confronting illicit drugs and transnational organized crime, both in Mexico as well as in the wider region."

Capitalizing on the expertise of Mexican institutions, the office will offer specialized training, research, trend analysis and monitoring of drug- and crime-related issues. The office will also offer advisory and legal services, as well as technical cooperation, to facilitate the alignment between federal and state public policies and strategies in these areas.

The office will build on the broad portfolio of UNODC work in the country. Last year, UNODC and the  Mexican Institute of Geography and Statistics (INEGI) jointly opened the Centre of Excellence for Statistical Information on Governance, Victims of Crime, Public Security and Justice. The centre works to strengthen the national capacities of Central American and Caribbean countries in collecting and analysing security and justice data.

In June, UNODC made an evaluation of the new model of federal police for the Ministry of Public Security. Similarly, UNODC is completing the first national survey of trafficking in persons in Mexico financed by the Ministry of the Interior, which is due for release in November. Mexico was the first country to adopt the UNODC Blue Heart Campaign (Campaña Corazón Azul), in April 2010, to raise awareness on human trafficking.

The strengthened partnership between Mexico and UNODC will see new and innovative joint projects in the areas of illicit crop monitoring, counter-terrorism activities, preventing corruption and fighting trafficking in persons and smuggling of migrants. Other projects will include evaluation of public policies for health-related substance abuse prevention and treatment, criminal justice reform and democratic security.

UNODC in Mexico, Central America and the Caribbean