As Central America confronts violence, our role is to offer assistance, says head of UNODC 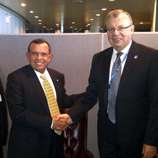 In a conversation with the President, Mr. Fedotov also reiterated the support of UNODC for a revised Central American Security Strategy. He noted that countries cannot confront those issues alone and stressed the need for an integrated approach connecting Central America to other regions while also promoting regional cooperation.

On the issue of the interconnected nature of organized crime, Mr. Fedotov said, "We must assess the criminal networks, not only the products they sell. These groups are involved in multiple crimes. Every one of these crimes may well involve violent activities."

During the meeting, Mr. Fedotov also discussed with the President the commitment of UNODC to strengthening port and airport security in Honduras through the Global Container Control Programme and AIRCOP. In support of those programmes, UNODC is currently finalizing its regional programme for Central America, scheduled to commence in 2013.

The meeting between Mr. Fedotov and the President of Honduras took place on the margins of the sixty-seventh session of the General Assembly. Earlier this year, during a thematic debate of the General Assembly on security in Central America, Mr. Fedotov called on the international community to work closely with the countries of the region.  "If successes are to be achieved, every country, in every region, needs to provide more support," he said.

On 27 September, Mr. Fedotov will be a special guest at the noon briefing of the Spokesperson for the Secretary General in New York to brief the media on the new UNODC threat assessment on Central America. The assessment highlights threats in the region, including cocaine trafficking, the smuggling of migrants and weapons, as well as human trafficking.