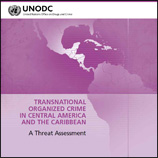 28 September 2012 - UNODC Executive Director Yury Fedotov presented a new UNODC study entitled Transnational Organized Crime in Central America and the Caribbean: A Threat Assessment to country representatives from the region. The event, held in New York, was attended by the Undersecretary of State for Foreign Affairs of Italy, Mr. Staffan De Mistura.

The study examines the impact of major trafficking flows of cocaine; women and children coerced into the sex trade; migrants smuggled for labour; and firearms.

"For the people of Central America and the Caribbean, violence fuelled by transnational organized crime and illicit drugs is one of the most urgent threats they face. We must recognize that criminals and their networks can hijack social and economic development. Democracy, criminal justice and strong anti-corruption strategies can help to prevent this from happening," said Mr. Fedotov.

The revenue generated by migrants from Central America for smugglers is around $85 million. In 2010, 87 per cent of migrants apprehended at the United States border were Mexican.

The report further reveals that in Central America, 77 per cent of all murders are committed using a firearm. There are an estimated 2.8 million unregistered firearms within the region, while the value of the annual trade is thought to be around $14 million, police in the region presently seizing 16,000 guns per year.

In terms of violence in the region, Mr. Fedotov noted that the Mexican security strategy for 2006 disrupted the cocaine supply to the United States market, forcing dealers to cut purity and prices. Those changes undermined United States demand for cocaine. Between 2006 and 2010, the number of annual cocaine users declined by 26 per cent. But this has not yet reduced the violence associated with the flow. For those reasons, where violence is related to illicit drugs, it flows from the fight for a share in a reduced cocaine market.

"We also need to remember that the countries in Central America are caught between the consumption countries in the North and the production countries of the South. They are hurting and they are suffering. The international community needs to recognize this. We must listen and we must continue to offer our assistance," concluded Mr. Fedotov.