Crime Commission closes on reminder that rule of law protects against violence, oppression and injustice 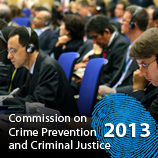 29 April 2013 - The 22nd Session of the Commission on Crime Prevention and Criminal Justice ended last week by emphasizing the importance of the rule of law and its role in supporting men, women and children across the world.

In the text of his closing speech Executive Director of the United Nations Office on Drugs and Crime (UNODC) Yury Fedotov drew on language from the Millennium Declaration when he said:

"Only the rule of law, informed by the spirit of fundamental human rights, can offer the framework for delivering men, women, and children from '…violence, oppression or injustice.' This is the profound work of the Commission on Crime Prevention and Criminal Justice: a commission on crime to stop the commission of crimes."

Speaking about wildlife crimes, Mr. Fedotov said the UN Convention Against Transnational Crime offered a dynamic tool that could be used to challenge the poachers, the traffickers and the sellers. The resolution encouraged Member States to take appropriate measures to prevent and combat illicit trafficking.

Tribute was also paid to the work of Member States in tabling and passing a broad range of resolutions in the area of crime prevention and criminal justice. Mr. Fedotov noted: "Every one of these resolutions offers an important contribution to the work of the Crime Commission… They highlight the intellectual depth of the Crime Commission's work, but also its commitment to making full use of the UN Convention Against Transnational Organized Crime."

The CCPCJ is the central body within the UN system dealing with crime prevention and criminal justice policy, including trafficking in persons, transnational crime and aspects of terrorism prevention. In addition to the resolutions passed, over 30 side events were held, and a record 900 participants from Member States, civil society and the media attended.