India: Living with HIV against all odds 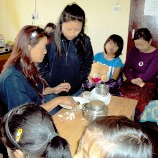 5 February 2013 - Emy* was born and brought up in the state of Meghalaya in north-east India. She dropped out of school at an early age and was introduced to drug use at a wedding, when some friends gave her cough syrup. She then moved on to painkillers and, over time, went from being a recreational drug user to being drug dependent. She experimented with different drugs and also started to inject heroin. "While on drugs I felt good; I felt confident," Emy says. "I was now better accepted by my friends."

But before too long, many of her friends were dying from overdoses, and her life was crumbling as well. Her family eventually gave up on her. Divorced and with a child to care for, she started selling drugs; not only to support her child, but also her drug habit.

Life for Emy took a turn for the worse when she visited the doctor with a gynaecological problem and was asked to get herself tested for HIV. The test was positive. "Everything went black and I thought I was going to die. I didn't know what had hit me," Emy says. "I didn't know how I was to continue my life after being told that I was HIV positive."

For a couple of years, Emy tried to hide her status. Nonetheless, the news came out, and people started to ignore or walk away from her. At church, nobody wanted to sit next to her, and Emy started hiding and became depressed.

When news of her condition reached outreach workers from various NGOs, they came to meet her and informed her about the services available at drop-in centres (DICs). The UNODC supported DIC in Meghalaya offers gender specific services to female injecting drug users and female sex partners of male injecting drug users. Women coming to this centre are able to consult women doctors, counsellors and have access to sterile needles and syringes, condoms and HIV testing.

At first Emy was hesitant, but eventually she agreed to visit the DIC. It was an enjoyable experience. " When I saw the counseling offered to me at the DIC I felt very comfortable. They accepted me for who I was and this forced me to talk to people about my status. The DIC became like a home for me."

She also registered for opioid substitution treatment, which she has been on since October 2010. This helped her restore her social life and she was also now able to do her household chores. Currently, she works as a peer educator for people living with HIV/AIDS. She encourages them to shed their shame and lead a life of dignity. She also works with children, educating them about the disease and its transmission.

In her spare time she makes artificial flowers. The intricate work involved in making the flowers used to bother her earlier, but she slowly got used to it. She now enjoys making them and says that it keeps her occupied. She says that these flowers are an embodiment of the strength and endurance with which she is fighting her battle against HIV.