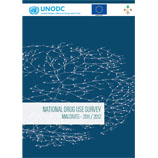 28 February 2013 - Earlier this month, the results of the first-ever National Drug Use Survey for the Maldives was released in the capital Malé. The survey was undertaken in close collaboration with UNODC and it provides an overview of the drug use situation in the country.

The survey found that the current drug use prevalence, including the use of alcohol, in the capital city Malé is 6.64 per cent. In the rest of the country, the prevalence rate is around 2 per cent. In total, there are an estimated 7,500 drug users in the Maldives. The majority of drug users are young people in the 15-24 age cohort.

Cannabis was the most commonly used drug, followed by alcohol and opioids. Around 200 drug users in Malé and 300 in the rest of the country were found to be injecting drug users who are vulnerable to the spread of blood-borne diseases like HIV/AIDS and hepatitis.

"The findings of the survey will not only allow for a better understanding of drug use among the youth in the country, but will serve as a useful tool for planners, policy makers, researchers and academicians to shape future drug use prevention policies in the country for the benefit of its entire young population," said UNODC Regional Representative for South Asia, Cristina Albertin, in her preface to the report.

The survey also studied community knowledge of and attitudes towards the drug problem. In this regard, communities perceive drug use to be an increasing problem, but at the same time they do not easily understand it nor treat drug dependency as a medical condition. Also, many people feel that such treatment has not been effective.

The report identified a number of measures to address the drug situation in the Maldives comprehensively. These measures include supply reduction through strengthened law enforcement, increased awareness activities in schools and communities and encouragement of drug users to access treatment services. Moreover, the survey calls for the development of an information management system to collect, analyse and share data on drug use, as well as mainstreaming drug use issues in programmes of other sectors like public health, children and youth, education and human resources.