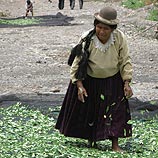 Bolivia has taken steps to once again become a party to the 1961 Single Convention on Narcotic Drugs, as amended, with a reservation on the chewing of coca leaf, a traditional practice among its people. The country's re-accession was conditional on the acceptance of States that have ratified or acceded to the Single Convention of the reservation in accordance with Article 50, paragraph 3.

Bolivia's re-accession comes into force on 10 February 2013. Bolivia had withdrawn from the 1961 Single Convention on Narcotic Drugs, as amended, with effect from 1 January 2012. The 1961 Convention controls the cultivation of coca bush and includes the coca leaf as a narcotic drug. The plant contains alkaloids which can be used in the production of cocaine.

UNODC will continue to work in Bolivia in accordance with its mandates to support the national system of drug control and the country's international cooperation in these matters.