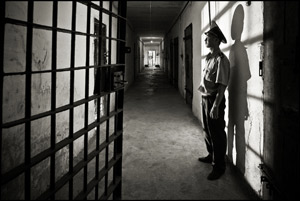 23 January 2013 - UNODC experts assist requesting countries in many parts of the world in their efforts to prevent crime and enhance their criminal justice systems. A key objective is to build the capacity of justice systems to operate more effectively within the framework of the rule of law, while paying particular attention to the needs of vulnerable groups such as children and crime victims. Measures to prevent and respond to illicit drugs, organized crime, corruption and terrorism require as a foundation a criminal justice system that is effective, fair and humane. Comprehensive and balanced crime prevention strategies are also crucial.

The UNODC Thematic Programme on Crime Prevention and Criminal Justice Reform, 2012-2015, which provides the global framework for UNODC's efforts in these areas, was launched in November last year. Key components of the programme include providing assistance to victims and witnesses of crime, improving access to justice (including access to legal aid), promoting restorative justice, preventing gender-based violence, promoting justice for children and supporting prison reform and alternatives to imprisonment.

The crime prevention and criminal justice portfolio of UNODC has increased considerably over the last couple of years. At the moment, the Office is implementing 43 projects in more than 30 different countries. UNODC technical assistance ranges from comprehensive assessments of the functioning of the criminal justice systems to specific interventions in the various areas covered by the Thematic Programme.

For example, in Kyrgyzstan like in many other countries, the prison system faces a wide range of challenges, including poor infrastructure; difficulties separating categories of offenders; acute overcrowding; breakdown of prison industries and a lack of qualified prison staff and training. In response, UNODC is working with the Government to reform the penitentiary system at legislative, policy and management levels, in order to improve the treatment of prisoners and contribute to their social reintegration. Moreover, a series of income generating activities have been initiated, such as a soya milk production line, a sowing workshop and a bakery. Upgrading of sanitary conditions in four prisons is also under way.

In Viet Nam, UNODC efforts have focused on tackling domestic violence. Many women suffer serious harm at the hands of partners or former partners. UNODC trains law enforcement officials to prevent and respond to incidents more effectively and with greater sensitivity, and facilitates research on experiences of victims of domestic violence with law enforcement and the judiciary. Raising public awareness on this issue is also crucial as it is still considered taboo. A countrywide campaign, "Say No to Domestic Violence", had members of the public participate in a writing and painting competition, where the winning articles were published in local newspapers and the winning paintings exhibited at the National Arts and Culture Exhibition Centre.

In Egypt, UNODC facilitates social reintegration of children and youth once they leave the detention centre. The Office has provided legal and psychological counseling as well as administrative and economic support to released children and youth. UNODC has also offered economic reintegration programmes through NGOs to help youth re-engage in the labour market and created a network of employers to facilitate rehabilitation of young former ex-prisoners.

UNODC is assisting Panama in the restructuring of key institutions involved in the application of justice across the country by training prosecutors and supporting the computerization of criminal proceedings at the Public Ministry. In order to improve citizens' security, UNODC is also training criminal justice officials on human rights and gender awareness, and has supported the creation of an Observatory of Violence to assess the situation of youth violence and violence against women in the country. Moreover, several training initiatives have been carried out to improve juvenile justice in Panama.