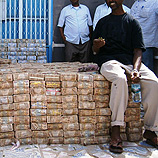 04 November 2013 - Between $339 million and $413 million was taken in ransom from the hijacking of ships off the coast of Somalia and the Horn of Africa between 2005 and 2012, according to a newly released report. The study - carried out by UNODC, the World Bank and INTERPOL - reveals that much of the ransom money was used to fuel a wide range of criminal activities on a global scale.

"Pirate Trails" - using data and evidence from interviews with former pirates, government officials, bankers and others involved in countering  piracy - investigates the flow of ransom money paid out to Somali pirates operating in the Indian Ocean. The study examines the reach of the pirates into the stimulant "khat" trade, human trafficking and other illegal activities that hinder development.

Tracing a pattern that it calls "the pirate money model," the study analyzes the investments made by a sample of 59 pirate "financiers" to reveal the range of sectors - including both legitimate businesses and criminal ventures - that were funded by the ransom money. Emphasizing the prominent position of pirate financiers, the report estimates that between 30 percent and 75 percent of the ransom money ends up with these financiers. The pirate "footsoldiers" aboard the ships receive just a fraction of the proceeds, amounting to between 1 per cent and 2.5 per cent of the total.

Stuart Yikona, a World Bank Senior Financial Sector Specialist and the report's co-author, says that its findings highlight the dangers posed not only by the hijackings themselves but also from the proceeds of the criminal acts: "Unchallenged piracy is not only a menace to stability and security, but it also has the power to corrupt the regional and international economy."

Piracy costs the global economy about $18 billion a year in increased trade costs. Because the outbreak of piracy has reduced maritime activity around the Horn of Africa, East African countries since 2006 have suffered a significant decline in tourist arrivals and fishing yields. International remittances - a lifeline for the poor - have been affected by the decision of some banks to cease their operations with money remitters working with Somalia, which some financial institutions associate with risks involving the funding of terrorist activities.

"Pirate Trails" assesses how the ransom proceeds are moved, invested and used. The report calls for coordinated international action to address the issue, and it sets out how the flow of illicit money from the Indian Ocean can be disrupted.

Among the report's findings, "Pirate Trails" shows that ransom money was:

"Pirate Trails" also illustrates the effect of the hijackings on the local Somali economy in terms of the employment of footsoldiers and the purchase of goods to sustain the piracy operations.

A coordinated effort by international financial authorities is needed to address the threat, says Yikona:  "The international community has mobilized a naval force to deal with the pirates. A similarly managed multinational effort is needed to disrupt and halt the flow of illicit money that circulates in the wake of their activities."

That assertion is echoed by Tofik Murshudlu, Chief of the Implementation Support Section in the Organized Crime and Illicit Trafficking Branch at UNODC, who notes that, while the international community may be winning the battle against pirate footsoldiers at sea, it should be wary not to lose the war against criminal kingpins on land. "The vast amounts of money collected by pirates, and the fact that they have faced virtually no constraint in moving and using their assets have allowed them not only to thrive, but also to develop their capacities on land," says Murshudlu. "These criminal groups and their assets will continue to pose a threat to the stability and security of the Horn of Africa unless long-term structural solutions are implemented to impede their current freedom of movement."

"Pirate Trails" calls for a range of practical measures, including strengthening the capacity of countries in the Horn of Africa to deal with illegal cross-border cash smuggling; risk-based oversight of Money Value Transfer Service Providers; and the development of mechanisms to monitor international financial flows into the khat trade.

UNODC's Global Programme against Money Laundering, Proceeds of Crime and the Financing of Terrorism