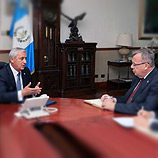 22 November 2013 - "I welcome the work being undertaken by the Guatemalan government against transnational organized crime, including human trafficking. UNODC will continue to provide every possible technical support and assistance to the country," said the Executive Director of the UN Office on Drugs and Crime, Yury Fedotov, after his 21 November meeting with the President of Guatemala, Otto Perez Molina.

The meeting with the president came during Mr. Fedotov's two-day mission to Guatemala to discuss a number of key issues with high-level members of the Guatemalan government.

Earlier in the day, Mr. Fedotov visited Guatemala's first anti-human trafficking unit within the national police force. "This new unit is a continuation of the good work already being undertaken in Guatemala by the authorities to counter human trafficking," he said.

"Guatemala has successfully aligned its national laws to the human trafficking protocol of the UN Convention Against Transnational Organized Crime. Now, with this unit fully operational, the authorities can continue to help the women, children and men subjected to this modern-day form of slavery."

Prior to the event, Mr. Fedotov met with Edi Juárez, the Vice-Minister of Security and Zulma Subillaga, Vice-presidency Secretary for Sexual Violence, Exploitation and Human Trafficking to discuss the current challenges regarding this crime that impacts on millions of people and generates billions of dollars globally for the traffickers.

Countries in Central America and the Caribbean have reported high proportions of victims trafficked for sexual exploitation. Similar to other regions, trafficking tends to follow a general pattern of victims being trafficked from the relatively poorer to comparatively richer neighbours.

Also during his mission to Guatemala, Mr. Fedotov met with the Minister of Foreign Affairs and the Attorney-General of Guatemala. On completing his visit, Mr. Fedotov travelled to Panama to open the Fifth Session of the Conference of States Parties to the UN Convention against Corruption. The conference attracts over 1,200 people and is the world's biggest biennial meeting on global anti-corruption activities.

UNODC Regional Office for Central America and the Caribbean in Panama