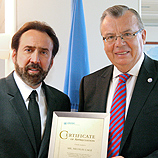 5 November 2013 - Oscar-winning actor and film-maker Nicolas Cage today renewed his appointment as a UNODC Goodwill Ambassador for Global Justice. During a signing ceremony at UNODC's Headquarters in Vienna with Executive Director Yury Fedotov, Mr. Cage committed to a second tenure of two years to lend his support to UNODC as a Goodwill Ambassador. "Of all the experiences I have had in my life this has been the most humbling and challenging of responsibilities", said Mr. Cage, adding that this was a title and position he was "very proud to hold."

Mr. Cage has starred in some 70 major motion pictures. His performance in Leaving Las Vegas earned him the Oscar for Best Actor in 1995, followed in 2002 by a second nomination for his dual roles in Adaptation. He has received a Golden Globe Award, two MTV Movie Awards and a Screen Actors Guild Award, among others, and has been honoured with a star on the Hollywood Walk of Fame.

Mr. Cage, who has produced, directed and acted in films often dealing with issues of global justice, terrorism, arms trafficking, sex crimes, and drug trafficking, has been a supporter of UNODC since 2009 when he was first appointed as a Goodwill Ambassador for Global Justice. During his first tenure, Mr. Cage launched UNODC's "Welcome to Gulu" benefit exhibition at the UN featuring paintings by former child soldiers and abducted girls. He also participated in an intensive UNODC mission to Uganda and Kenya focusing on child soldiers and other forms of human trafficking, as well as piracy, prisons, HIV and AIDS and drug addiction. During this mission, among other things, he conducted an acting workshop with former child soldiers and abducted girls. He has also spoken at the Conference of the Parties to the United Nations Convention against Transnational Organized Crime in Vienna to draw attention to the plight of victims of transnational organized crime worldwide.

Apart from the signature of his new tenure as a Goodwill Ambassador, Nicolas Cage is in the Austrian capital to attend a fund-raising event in support of victims of human trafficking. Proceeds from the event will go the United Nations Voluntary Trust Fund for Victims of Trafficking in Persons, which supports grass-roots organizations that rescue, shelter and reintegrate victims into society.