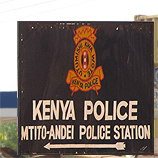 22 October 2013 - UNODC's Regional Office for Eastern Africa recently launched a project to support police reforms in Kenya. In light of the tragic recent terror attack in Nairobi, the Government of Kenya and the international community reaffirmed the need to urgently strengthen the capacity of law enforcement agencies in order to provide a peaceful and secure society for all Kenyans.

The overall goal of the project, which is part of a broader criminal justice programme in Eastern Africa targeting 13 countries, is to create a solid and efficient police sector in Kenya. Despite efforts in recent years, reforms in the police sector in the country have largely focussed on operational and administrative aspects. The project will also now target institutional, legal and policy areas that are necessary for transformation.

The project will help establish a legal framework to govern policing and support effective and sustainable institutional reforms to enhance professionalism, integrity and accountability within the police.

UNODC has supported criminal justice reforms in Kenya since the development and subsequent enactment of the country's new constitution in September 2010.  The project will now provide additional direct technical assistance to the National Police Service, the Independent Policing Oversight Authority and the National Police Service Commission to strengthen their capacity.

This includes advisory services to boost oversight functions in order to increase transparency and accountability, institution-building efforts such as the development of vetting tools and the revision of existing codes of conduct and ethics, as well as training on intelligence-led policing, forensic investigations, counter-narcotics, organized crime and counter-terrorism.

The recently launched project is the result of a partnership between UNODC, the Governments of Israel, Sweden and the United States of America, and key security institutions within the Government of Kenya.