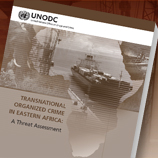 According to the report, more than 100,000 people were smuggled out of the region last year alone, generating over of $15 million for organized criminal networks operating on the maritime crossing from the Horn of Africa. Ivory poaching, which results in up to 154 metric tons being taken annually, led to an additional $30 million in illicit revenue just from Asian markets. Drugs are an increasingly lucrative illicit trade. Up to 22 tons of heroin are now trafficked to and through the region annually, with local consumption alone amounting to some $160 million a year. Finally Somali piracy was worth an estimated $150 million in 2011, equivalent to almost 15 per cent of the country's GDP. Throughout 2013, however, no successful hijackings for ransom have been made in the Somali area of operation, and this remarkable progress shows that even the largest crime problems can be countered through international cooperation.

The report - Transnational Organized Crime in Eastern Africa: A Threat Assessment - is aimed at highlighting the most pressing transnational organized crime threats facing the region. Looking at some of the key areas, this latest report focuses on four such concerns: migrant smuggling from Ethiopia and Somalia to Yemen and Saudi Arabia; heroin trafficking from South-West Asia to Eastern Africa; ivory trafficking through Eastern Africa to Asia; and Somali maritime piracy.

The role of transnational organized crime is evident in migrant smuggling. This is driven in part by high levels of conflict and poverty which have resulted in a large and vulnerable stream of migrants. Many of those trying to escape the situations they face are subjected to a range of abuses, including confinement, beatings, extortion and rape at multiple stages of their journey. In 2012 alone, more than 100,000 people paid smugglers to transport them across the Gulf of Aden or Red Sea to Yemen where their journey takes them onwards to Saudi Arabia, with the sea passage alone generating over $15 million for organized criminal networks.

Regional wildlife trafficking is also increasing, and Eastern Africa appears to be the main conduit through which illicit ivory is flowing. Recent research indicates that the rate of poaching in Eastern Africa has risen to levels that could significantly threaten the local elephant population. Between 5,600 and 15,400 elephants are poached in Eastern Africa annually, producing between 56 and 154 metric tons of illicit ivory. In 2011, two-thirds of this, or 37 tons, was destined for Asia, worth around $30 million.

The regional drug trade represents another core threat. While heroin has been trafficked to and through Eastern Africa since at least the 1980s, a series of recent large seizures suggests that this flow has increased. Between 2010 and 2012, more heroin was seized than in the previous 20 years and in the first five months of 2013, the seizures exceeded those of the total previous 24 months. Annually, as much as 22 tons is trafficked to the region. While it is estimated that at least 2.5 tons of this is consumed locally every year (worth some $160 million), the excess suggests substantial amounts are transited through the region, particularly to Southern and West Africa, and possibly beyond.

In 2011 Somali pirates reaped an estimated $150 million. In recent years, however, progress has been made in tackling this issue. International countermeasures have contributed to a dramatic decline in piracy. While in April 2009 pirates hijacked 16 ships, two years later this averaged less than one per month; in the first half of 2013 there were no successful hijackings for ransom in the Somali area. Effective intervention has also forced pirates to move further away from the coast: in 2005, the average successful pirate attack was 109 km from the Somali coast; in 2012, it was 746 km.