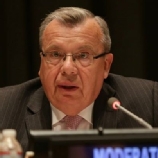 25 April 2014 - In remarks delivered at a day-long debate at the UN General Assembly in New York on "ensuring stable and peaceful societies," the Executive Director of the UN Office on Drugs and Crime (UNODC), Yury Fedotov, said, "We have seen the devastating consequences to health, security and development caused by drug trafficking and other organized crime activities, which know no borders."

The thematic debate was opened by UN Secretary-General Ban Ki-moon and President of the General Assembly John Ashe and attended by representatives of member states, UN agencies and international organizations, as well as academics and civil society representatives.

Mr. Fedotov went on to say that corruption and a lack of good governance are major threats to social and economic development. "Weak institutions make it easier for crime, violence and corruption to prevail. Ineffective and inaccessible criminal justice systems fall short in the protection of human rights, " he said.

The Executive Director was making his remarks during an afternoon panel session on 24 April titled, "Strengthening national institutions towards achieving sustainable development."

His remarks made direct reference to the importance of  building on the Millennium Development Goals to create a sustainable future for everyone. But to achieve this, Mr. Fedotov said, there was a need to "strengthen, and make more effective, national, regional and international institutions promoting security, justice and the rule of law."

Earlier in the day, Mr. Fedotov had addressed the first panel session of the thematic debate where he emphasised that justice and corrections components were essential to re-establish the rule of law and support national capacity building.

On 25th April, Mr. Fedotov gave a briefing to the UN Counter-Terrorism Committee Executive Directorate (CTED) in which he also stressed that "weak governance and weak criminal justice systems often go hand in hand with instability, crime and terrorism."