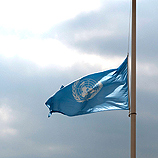 17 April 2014 - At an open-air service held in Memorial Plaza at the Vienna International Centre (VIC), family, friends, colleagues and country representatives paid a dignified and moving tribute to Clément Gorrissen and Simon Davis who were killed in Puntland, Somalia on 7 April.

After one minute's silence for the two men, UNODC Executive Director, Yury Fedotov, said in his opening remarks, "There are no words that can convey the grief we feel at this cruel and terrible loss. No words can bring comfort in the face of such injustice. But let us remember that Clément and Simon served the cause of justice."

Mr. Fedotov described Clément and Simon as individuals who passionately "supported the people of Somalia, and helped to lay the careful groundwork for peace and prosperity." At the end of his speech Mr. Fedotov said, "We at the United Nations must continue their brave work, and renew our commitment to making a world where such tragedies do not happen."

Speaking for Clément's and Simon's many colleagues, John Sandage, Director of UNODC's Division for Treaty Affairs, said, "Clément and Simon were ambassadors - and champions - of the values embodied by the United Nations and the UN Charter."

Once the speeches had been delivered, Laurel James, from the International Atomic Energy Agency stepped forward to the microphone to sing, "Amazing Grace," while Clément's and Simon's friends and colleagues stood quietly listening.

The Peace Bell was a gift from Japan and symbolizes the hopes of the Japanese people for peace. It resembles the peace bell at the UN headquarters in New York and was cast from coins collected from people in 60 countries. The bell is normally rung 3 times a year.

Clément Gorrissen, a French citizen, and Simon Davis, a UK citizen, were cruelly killed when a gunmen opened fire on them while passing through immigration at Galkayo airport, in Puntland, Somalia.