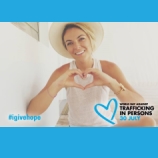 15 August 2014 - On 17 August, USA Network will broadcast a 10-episode marathon of popular TV show Law & Order: Special Victims Unit under the "End Human Trafficking" banner, in order to raise awareness about this crime. The series of broadcasts will be accompanied by information and resources provided by UNODC and its Blue Heart Campaign against Human Trafficking, calling on viewers to support the UN Trust Fund for victims of this modern-day slavery.

Additionally, on 20 Aug, the final episode of a Graceland series dealing with human trafficking will be aired. The show will be complemented by new public service announcements featuring two of the show's stars, Daniel Sunjata and Serinda Swan, who supported the campaign by making the hand heart symbol. The actors will encourage viewers to donate to the UNODC-managed Trust Fund for Victims of Human Trafficking.

Social media efforts will be reminding viewers to tune in to both shows, which come shortly after 30 July, the first ever World Day against Human Trafficking. On that day, UNODC received massive support and social media response through the #IGiveHope hashtag across the world, which helped bring to the fore the plight of human trafficking victims and the ways in which concerned individuals, organizations, the media and others can contribute to eradicating this crime.

UNODC, as a global leader in the fight against illicit drugs and international crime, includes in its programmes and campaigns tools and resources to assist Member States in their efforts against trafficking in persons. In 2010, the UN General Assembly established the United Nations Voluntary Trust Fund for Victims of Trafficking in Persons. The Trust Fund supports grassroots non-governmental organizations that directly assist victims and survivors of human trafficking in countries around the world.