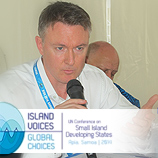 1 September 2014 - Delivering a statement on behalf of UNODC Executive Director Yury Fedotov during a side event at the third International Conference on Small Island Developing States (SIDS), UNODC Regional Representative for Southeast Asia and the Pacific Jeremy Douglas said that SIDS were vulnerable to the corrosive effects of corruption, particularly as it impacts on sustainable development. "To address this challenge," he added, "we have the UN Convention Against Corruption (UNCAC), which is the sole globally accepted framework to fight corruption, with 171 States parties, including 28 SIDS."

The meeting, which has drawn 3,000 participants from SIDS and elsewhere, is taking place in Samoa from 1-4 September. It seeks to galvanize renewed action for small island nations, including identifying how they will transition to a more sustainable development path regarding issues like climate change and renewable energy.

The UNODC side-event, titled "Sustainable Anti-Corruption Reform in Small Island Developing States (SIDS)" drew attention to the importance of a common understanding around governance and anti-corruption. The joint UNODC-UN Development Programme (UNDP) Pacific Regional Anti-Corruption Project was also highlighted as an excellent platform for achieving anti-corruption objectives in the Pacific, and the UNCAC Review Mechanism was mentioned as a key entry point to reform.

"The importance of combating corruption and promoting good governance has increasingly come to the fore, notably in the ongoing dialogue on the post-2015 development agenda," UNODC Regional Representative for Southeast Asia and the Pacific, Jeremy Douglas, on behalf of Mr. Fedotov, stressed. Other issues discussed at the side-event included the need to link small states efforts to address transnational organised crime, money laundering and corruption, and how to use anti-corruption tools like whistleblower and witness protection schemes in a small state context.

Mr. Douglas was joined at the side-event by UNDP Pacific Centre Regional Manager, Peter Batchelor, the Attorney-General of the Federated States of Micronesia, April D. Skilling, as well as an expert panel drawn from several regions of the world.