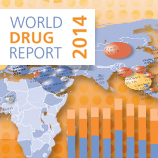 26 June 2014 - Drug use prevalence is stable around the world, according to the 2014 World Drug Report of the United Nations Office on Drugs and Crime (UNODC), with around 243 million individuals, or 5 per cent of the world's population aged 15-64, having used an illicit drug in 2012. Problem drug users meanwhile numbered about 27 million, roughly 0.6 per cent of the world's adult population, or 1 in every 200 people.

Launching the report in Vienna today, the International Day against Drug Abuse and Illicit Trafficking, Yury Fedotov, Executive Director of UNODC, appealed for a stronger focus on the health and human rights of all drug users, but particularly those who inject drugs and are living with HIV. "There remain serious gaps in service provision. In recent years only one in six drug users globally has had access to or received drug dependence treatment services each year," he said, stressing that some 200,000 drug-related deaths had occurred in 2012.

The UNODC chief said sustainable success in drug control required firm international commitment. A balanced and comprehensive approach addressing both supply and demand should be backed up by evidence-based responses focusing on prevention, treatment, social rehabilitation and integration. "This is particularly important as we move towards the Special Session of the General Assembly on the world drug problem in 2016," Mr. Fedotov stated. He also stressed that controlled substances should be made more widely available for medical purposes, including for ensuring access to pain medication, while preventing their misuse and diversion for illicit ends.

The surge in opium production in Afghanistan represented a setback, said Mr. Fedotov, since the world's largest opium-poppy grower had increased its area under cultivation by 36 per cent from 154,000 hectares in 2012 to 209,000 hectares in 2013.  With a crop yield of some 5,500 tons, Afghanistan accounted for up to 80 per cent of global opium production. In Myanmar, the area under opium poppy cultivation covered 57, 800 hectares, continuing the increase in cultivation begun after 2006. In 2013, the global production of heroin also rebounded to the high levels witnessed in 2008 and 2011.

The US, Oceania and some European and Asian countries have seen users switching between heroin and pharmaceutical opioids, a trend largely dictated by low prices and accessibility; but whereas dependent opioid users in the US are switching from  pharmaceutical opioids to  heroin, users in some European countries are replacing heroin with synthetic opioids.

The global availability of cocaine fell as production declined from 2007 to 2012.   Cocaine use remained high in North America, though decreasing since 2006. Whereas cocaine consumption and trafficking appear to be increasing in South America, Africa has already witnessed emerging cocaine use due to the rise in trafficking through that continent, while greater spending power has made some Asian countries vulnerable to cocaine use.

Globally, cannabis use seems to be down but a perception of lower health risks has led to more consumption in North America. Although it is too early to understand the effects of new regulatory frameworks making the recreational use of cannabis legal in some states of the US and Uruguay under certain conditions, more people are seeking treatment for cannabis-related disorders in most regions in the world, including North America.

Seizures of methamphetamine more than doubled globally between 2010 and 2012. Methamphetamine manufacture expanded once again in North America, with a large increase in the number of meth laboratories dismantled in the US and Mexico. Of the 144 tons of amphetamine-type stimulants (ATS) seized globally, half were intercepted in North America and a quarter in East and South-East Asia. The number of unregulated new psychoactive substances on the global market more than doubled to 348 from 2009 to 2013.

The globalization of the chemical trade has made it easier to divert chemicals from legal to illegal uses. However, the control of precursors, the chemicals needed to manufacture plant-based or synthetic drugs, has tangibly curbed such diversion.

Between 2007 and 2012, 15 per cent of diverted acetic anhydride, used to manufacture heroin, and 15 per cent of potassium permanganate, used to produce cocaine, were intercepted.  During that period, seizures of amphetamine and methamphetamine precursors were more than twice as high as seizures of the drugs themselves. Declines in the use of substances such as LSD and ecstasy in recent years can also be partly attributed to improvements in precursor control, which keeps the price of diverted chemicals high and raises the production costs of drugs.  In Afghanistan, acetic anhydride commanded up to $430 per litre in 2011, up from $8 in 2002, but it cost $1.50 per litre in the world's licit markets.

As progress has been made in tracking down precursors, criminals have turned to new tactics, such as creating front companies and diverting precursors within countries to circumvent international controls. New unregulated "pre-precursors" have rapidly emerged as substitutes for the controlled precursors used to produce ATS. Mr. Fedotov urged utmost vigilance. "Monitoring global chemical flows is especially important with the rising manufacture and trafficking of synthetic drugs, which cannot be controlled with traditional supply reduction approaches such as crop eradication," he said.  "A robust international control system must remain a key supply control strategy."