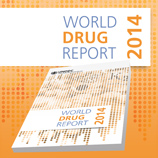 23 June 2014 - The World Drug Report 2014 will be presented to Member States on 26 June by UNODC's Executive Director, Yury Fedotov, in Vienna, during the International Day against Drug Abuse and Illicit Trafficking. The report will be launched during a Special Event of the fifty-seventh session of the Commission on Narcotic Drugs.

The World Drug Report provides an annual overview of the major developments in drug markets for the various drug categories, ranging from production to trafficking, including development of new routes and modalities, as well as consumption. A section of the World Drug Report 2014 provides a global overview of the latest developments with respect to opiates, cocaine, cannabis and amphetamines (including "ecstasy") and the health impact of drug use. Another section addresses the control of precursor chemicals used in the manufacture of illicit drugs.