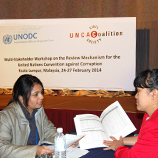 6 March 2014 - The UN Office on Drugs and Crime (UNODC) together with a coalition of civil society organizations and government representatives, met in Kuala Lumpur, Malaysia, from 24 to 27 February at an anti-corruption workshop.

The main focus of the event, attended by some 55 anti-corruption practitioners, representing civil society, the private sector and Governments from 14 South and South-East Asian countries, was the implementation of the United Nations Convention against Corruption (UNCAC) and the review mechanism set up for this purpose.

The workshop was hailed as one of the first "multi-stakeholder" encounters where Governments and representatives of civil society could enhance their dialogue and cooperation on combating corruption. It "clarified a number of issues in the UNCAC review process and 'broke the ice' between Governments and civil society organizations", according to Karunanithy Subbiah, from the Malaysian Anti-Corruption Commission.

Anuradha Singhai, from the Indo-European Chamber of Commerce and Industry, was eager to replicate a workshop like this back home in India, saying that it gave attendees "an insight into the workings of UNCAC and clearly explained all the chapters and articles along with the role of the government and the civil society." In addition to discussions and practical exercises for the countries involved in the UNCAC implementation review process, participants honed their skills in media relations and their engagement with the private sector.

UNCAC Coalition, a group of some 350 civil society organizations all over the world and co-organizer of the Kuala Lumpur workshop, noted the importance of such meetings in facilitating the interaction of the civil society with their Government counterparts. For Vincent Lazatin, the Chair of the UNCAC Coalition, "future multi-stakeholder workshops will reinforce the notion that constructive dialogue is the default mode of engagement."

The UN Convention against Corruption is the only legally binding universal anti-corruption instrument and its Article 13 calls on civil society to play an active role in combating corruption. To date, over 175 civil society organizations from across the world have been trained under the UNODC Civil Society Programme with the aim of providing the necessary tools to work with governments and the private sector on implementing the Convention against Corruption.