'It's a crime': Corruption 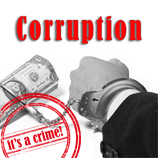 12 February 2015 - Corruption is the single greatest obstacle to economic and social development around the world. But it does not just steal money from where it is needed the most; it leads to weak governance, which in turn fuels organized criminal groups and promotes crimes such as human trafficking, arms and migrant smuggling, counterfeiting and the trade in endangered species.

In the run up to the 13th United Nations Crime Congress being held in April, different crimes are being highlighted, showing their impact on development and how vital it is to tackle them to achieve sustainable development. In February 2015 the focus is on corruption, outlining the scale of the problem and telling its transnational story.

It stifles economic growth, undermines the rule of law, and squanders talent and precious resources. Where corruption is rife, companies are reluctant to invest as the costs of doing business are significantly higher. Ultimately, corruption prevents people, countries and businesses from fulfilling their potential.

Corruption is one of the many transnational crimes that will be discussed at the 13th United Nations Congress on Crime Prevention and Criminal Justice in Doha, Qatar. Held from 12 to 19 April 2015, the Congress will bring together governments, policy-makers and experts to share their experiences and intensify international cooperation in tackling the threat of transnational organized crime. As the international community continues to discuss the post-2015 development agenda, so the Crime Congress will focus on the links between security, justice and the rule of law, and the attainment of a better, more equitable world.