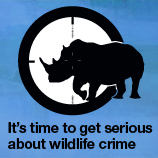 17 February 2015 - Once an emerging threat, wildlife and forest crime has today transformed into one of the world's largest transnational organized criminal activities, alongside the trafficking of drugs, arms and humans. With the involvement of organized criminal groups, the industrial-level operations have been devastating: according to CITES, in 2013 alone, some 20,000 African elephants were killed, while in South Africa last year, 1,215 rhinos were poached for their horns.

Criminal groups are posing a real threat to a wide range of species. At the same time, they are exploiting gaps in national legislation which undermine safety and security. To raise awareness about this, and highlight the critical need to step-up efforts in tackling the groups involved, UNODC together with CITES have developed a new global awareness-raising campaign under the slogan ' It's time to get serious about wildlife crime'.

Launched ahead of the second annual World Wildlife Day which will be marked on 3 March, the campaign aims to highlight the scope of organized wildlife crime and the role of the networks that are making vast profits from decimating the world's fauna and flora. Around this, UNODC, CITES, UNEP, UNDP and many other groups and individuals are using their online voices to reach out, raise awareness and generate support for this critical issue.

This year, we're encouraging people everywhere to join us and harness the power of social media in calling for the world to get #SeriousAboutWildlifeCrime. Add your voice to this call and join us through two easy actions:

In addition to this global campaign, official events will be held on the day in New York at the United Nations General Assembly and at the Central Park Zoo.