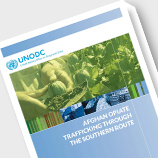 17 June 2015 - A significant portion of opiates originating in Afghanistan are transiting Africa before being trafficked onwards to Europe, North America and other consumer markets, UNODC noted in a new report published today. Afghanistan is the largest producer of opium in the world and the 'Balkan' route (through the Islamic Republic of Iran and Turkey) has traditionally been the primary route for trafficking heroin out of Afghanistan.The report, entitled 'Afghan Opiate Trafficking - the Southern Route', however, notes a changing trend: the 'southern route' - a collection of trafficking routes within which organized criminal groups smuggle heroin out of Afghanistan on southerly flows - are gaining ground in the supply of some European markets.

Recent large opiate seizures further out in the Indian Ocean have highlighted the potential for traffickers to send sizeable shipments using boats departing from unofficial ports and jetties along the coast of Iran and Pakistan. Maritime trafficking is likely facilitating the smuggling of large quantities of heroin or opium into third countries. During 2014, a multinational naval partnership in the region, the Combined Maritime Forces, intercepted almost 3.4 tons of heroin on 18 different vessels in the Indian Ocean.

The prominence of African sub-regions as potentially important consumption and transit zones for the trafficking of Afghan heroin along the southern route is another major finding of this report. The wide array of cargo and air links having Africa as a destination or transit point offer many opportunities for traffickers. The information available at present suggests that different regions of Africa are developing important roles in facilitating the transit of heroin along the southern route, and networks from those regions have taken control of some trafficking routes.

The report also highlights the fact that due to their geographical proximity, Iran and Pakistan face a tremendous challenge in dealing with the large flows of opiates originating from Afghanistan to feed their domestic heroin markets. The location of these neighbouring countries also makes them a major transit point for the trafficking of Afghan opiates along the southern route.

Recent developments in the illicit trafficking of opiates along the southern route highlight the importance of mutual cooperation between countries, regions and organizations. The Joint Planning Cell, part of the Triangular Initiative which promotes collaboration between Afghanistan, Iran and Pakistan, had planned and coordinated 17 operations by December 2012, resulting in the seizure of more than eight tons of drugs. The report notes the need for further development of such cooperation frameworks.