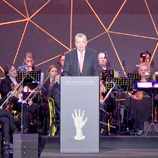 The Award, established by the  Rule Of Law and Anti-corruption Center (ROLACC), is designed to support UNODC's anti-corruption mandate and highlight the importance of tackling corruption. It also seeks to encourage the implementation of the  United Nations Convention against Corruption as the world's only legally binding international anti-corruption treaty.

Coinciding with this event, a sculpture representing efforts in tackling corruption was also unveiled at the United Nations in Vienna. The structure, donated by Qatar, joins a range of other works situated around the UN grounds which highlight the varied work of the Organization. The sculpture is of a large hand, depicting the urgency of stopping corruption and saying "no" to this crime.

The Award itself is aimed at showcasing creative and outstanding achievements of anti-corruption efforts from across the globe and acts as both a tool to honour those who have shown dedication to tackling corruption and as an inspiration to others to replicate similar efforts. Commenting on this at the opening of the Award ceremony, Dr. Al Marri noted, "This is an important and far reaching initiative, and it requires committed and courageous people who have the determination to fight corruption at all levels. To the Award winners, I hope that this award will inspire and support you, and others, to continue the fight against corruption".

Qatar's efforts to drive crime prevention and the rule of law was evidenced through the support given to the Doha Declaration adopted at the 13th Crime Congress last year and translated into a wide-ranging Global Programme which is being undertaken through to 2020.

Highlighting the ever-pressing need to work towards tackling corruption, and offering his congratulations to the recipients whose efforts reflect this, Mr. Ban said: "As a strangling root that reaches deep into all our societies, corruption chokes hopes and frustrates opportunities. It enables the few to prosper at the expense of millions who are left behind. Through their courage, today's award recipients are delivering a clear message that corruption is incompatible with fair and ethical societies".

Pointing to the actions taken by the Award recipients, as well as people from all walks of life, Mr. Fedotov spoke on the importance of inclusive efforts to tackle corruption: "Together, the public and private sectors, international and regional organizations, financial institutions and civil society, must stand united against corruption in all its forms". He also referenced the new, multi-year International Anti-Corruption Day theme officially launched today - #UnitedAgainstCorruption - and spoke of the centrality of the 2030 Agenda for Sustainable Development. "The 2030 Agenda has given fresh impetus to the battle against corruption by recognizing that anti-corruption action is essential to end poverty; ensure quality education, promote decent work and economic growth; and protect natural resources".

Rule Of Law and Anti-corruption Center