We have made headway but crisis continues, says UNODC Chief on Wildlife Crime 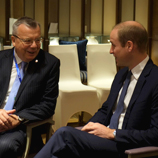 17 November 2016 - "Southeast Asia has tragically suffered losses in its rich biodiversity, including tiger and rhino sub-species, while … other species are being decimated,"  UNODC Executive Director, Yury Fedotov told a high-level audience today.

He was speaking at the Hanoi Conference on Illegal Wildlife Trade following similar conferences in Botswana and the United Kingdom. Other speakers included His Royal Highness Prince William, Duke of Cambridge, Vietnam Vice President, Dang Thi Ngoc Thinh, Deputy Prime Minister of Lao PDR, Deputy Minister of Ministry of Agriculture and Rural Development, Ha Cong Tuan, and the Secretary-General of the Convention on International Trade in Endangered Species of Wild Fauna and Flora (CITES), John Scanlon.

Mr. Fedotov thanked the audience of ministers, ambassadors, law enforcement officials and civil society representatives for its passionate commitment to stopping the illegal wildlife trade. The UN's role, he said, was to help "build  collective action to promote the healthy and sustainable use of our planet and its resources".

UNODC was committed to working with the CITES Secretariat and other partners to support countries and achieve this goal; but, Mr. Fedotov cautioned, "We need your help to promote further measures to strengthen criminal justice and preventive responses, including through use of the UN conventions against transnational organized crime and corruption."

Work in this area, he said, included inter-agency wildlife crime task forces, harmonizing national laws, greater use of forensic wildlife science, and strengthening the ability of customs and border officials to deal with seizures. Mr. Fedotov identified a need for countries to exchanges intelligence and to activate joint investigation teams.

Accepting that some headway had been made, he said the crisis continued and "an important step would be for all countries to criminalize the possession of wildlife illegally sourced anywhere in the world. Penalties should be adequate for a serious crime, and serve as a deterrent."

Mr. Fedotov also met with the Duke of Cambridge and John Scanlon on the side lines of the conference to discuss wildlife crime issues.

UNODC, earlier this year, released the first World Wildlife Crime Report. The report outlined the global nature of this transnational organized crime with more than 164,000 seizures of 7,000 different species.