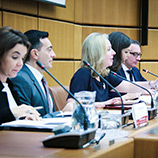 12 December 2017 - Representatives of Governments and international organizations as well as experts gathered in Vienna last week to mark the 10th anniversary of the International Convention for the Suppression of Acts of Nuclear Terrorism (ICSANT).

Speaking via video message at the event, which brought together over 100 participants from 47 delegations of States Parties and Signatories to the Convention, UNODC Executive Director Yury Fedotov said: "Nuclear terrorism is one of the greatest threats to humanity. No efforts should be spared in our work to overcome this global challenge."

In her opening remarks, Heidi Hulan, Ambassador of Canada to the International Organizations in Vienna, underscored the importance of strong communication and cooperation between States and organizations at the regional and international level. "Together we are only as strong as the weakest link in the security chain," she said, stressing that cooperation efforts must match the nature of the threat and not be limited by borders between States.

On that point, Mauro Miedico, Acting Chief of UNODC's Terrorism Prevention Branch, described prevention as an essential component in the fight against nuclear terrorism. The priority areas should be 'universalization, full and effective implementation, and collection and sharing of good practices', he said, reaffirming UNODC's commitment to help Member States.

Also participating, Maria Lorenzo Sobrado, UNODC Programme Officer, emphasized the need for continued universalization efforts, noting that "nearly half of the world is not part of this important instrument." Many of the provisions could "only be one hundred per cent effective if the Convention reaches universalization," she pointed out.

Opened for signature in 2005, ICSANT entered into force in 2007. It presently has 115 signatories and 112 States Parties. The event, in this regard, allowed participants to review their experiences in implementing the Convention's key obligations. It also provided a platform to highlight States' efforts to forge a global nuclear security architecture that is not only strong and resilient, but is also sustainable.

Mr. Fedotov, in his video message, thanked the Canadian Government for hosting the event and for its cooperation with UNODC on numerous issues. He added that the Convention is a cornerstone in the fight against nuclear terrorism.

UNODC undertakes a number of activities to tackle nuclear terrorism. The Office, supported by Canada, will host a workshop in Vienna next year to assist countries with the topic. UNODC also provides trainings against chemical, biological, radiological and nuclear (CRBN) threats, and will soon host a new e-learning framework to support the international legal framework against CRBN terrorism.

International Convention for the Suppression of Acts of Nuclear Terrorism