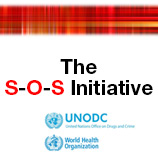 16 March 2017 - Drug use and drug use disorders are a public health, developmental and security problem both in industrialized and developing countries. Out of a total of more than 200,000 drug-related deaths in 2014, overdose deaths contribute to between roughly a third to a half of this figure, and which are attributable in most cases to opioids. Worldwide, overdose is the leading cause of avoidable death among people who inject drugs. It also accounts for nearly half of all deaths among heroin injectors, exceeding HIV and other disease-related deaths.

Opioid overdose is both preventable and, if witnessed, reversible through an adequate emergency response including the administration of naloxone, an opioid antagonist which rapidly reverses the effects of opioids. However, the availability of naloxone as an emergency medication is not always a given. Although it is on the WHO Model List of Essential Medicines, it is reported that naloxone is often not available.

During a special launch event at the current Commission on Narcotic Drugs taking place in Vienna this week, UNODC and WHO presented today the "S-O-S Initiative" focusing on Stopping Overdoses Safely. This effort aims at enhancing opioid overdose prevention in line with the recommendations of the WHO guidelines on Community Management of Opioid Overdose.

The initiative's targets include saving lives by making naloxone and training on overdose management available to all potential first responders, including peers and family members. The initiative sets a global implementation target of 90-90-90 as a joint point of reference: i) 90 per cent of the relevant target population will have received training in overdose risk and emergency management; ii) 90 per cent of those trained will have been given a supply of emergency naloxone; iii) 90 per cent of those who have been given a naloxone supply will be carrying the naloxone on them or have it close at hand.

In order to contribute to the 90-90-90 target described above, and in response to the 2016 General Assembly Special Session on the World Drug Problem, as well as CND resolution 55/7 on "Promoting measures to prevent drug overdose, in particular opioid overdose," UNODC and WHO - in the framework of their joint Programme on Drug Dependence Treatment and Care - are currently developing a comprehensive multi-country study protocol to better estimate the public health impact of community management of opioid overdose, including the use of naloxone.

Furthermore, as part of the S-O-S initiative, UNODC and WHO aim at building partnerships with relevant stakeholders worldwide and mobilizing resources to reduce preventable deaths due to opioid overdose.

WHO guidelines on Community Management of Opioid Overdose