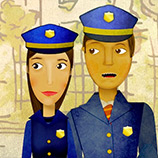 20 November 2017 - Many women and girls around the world continue to fall victim to numerous forms of discrimination, including violence, requiring a coordinated and systematic approach at all levels.

In a bid to tackle gender-based violence, UNODC has joined forces with Mexico and established a programme entitled "Strengthening of the Security for Vulnerable Groups".

Implemented by the UNODC Office in Mexico and the country's National Security Commission, the programme aims to train 8,000 police officers and 1,000 emergency call operators in 19 federal states to identify and provide assistance to gender-based violence victims.

UNODC also developed a manual on stress management and cognitive-ability for civil servants exposed to high levels of violence. Similarly, other informational materials such as booklets, videos and posters were developed as training tools for a better learning experience.

Combined with trainings, informational materials have enabled participants to capitalize on necessary skills to identify and tackle gender-based violence in Mexico. These reflect some of the outcomes achieved under the agreement between UNODC, the United States Embassy in Mexico and the National Security Commission. Signed in 2016, the agreement aims to improve institutional response to violence and care for victims while building capacities of public security institutions.