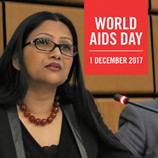 1 December 2017 - World AIDS Day has been organized on 1 December every year since 1988. This year's theme "My health, my right" underscores the need for all those affected by HIV to have access to prevention tools and treatment for this deadly disease.

The 2017 campaign stresses everyone's right to make decisions about their health, and to be treated without discrimination and with respect and dignity. These principles are fully supported by UNODC in its own work on HIV inside prisons and with people who use drugs.

To raise awareness of the World AIDS Day, and highlight UNODC's own role, Monica Beg, a doctor and UNODC's Chief of the HIV/AIDS Section, talked about her invaluable work.

Asked whether HIV among drugs users and people in prisons remained relevant, she said, "Three decades into the global AIDS pandemic, people who inject drugs and prisoners are still disproportionately affected by HIV."

Beg noted that new HIV infections among people who inject drugs has increased by 33 per cent between the years 2011 to 2015. Evidence also showed that prisoners were five times more likely to be living with HIV than adults living outside prisons.

Reflecting on the spread of HIV in prisons, Beg said, "Along with TB, AIDS is a major cause of death among prisoners in many countries." She added, however, the coverage of HIV prevention and treatment services for people who inject drugs and in prisons was poor. Only one per cent of people who inject drugs live in countries with adequate coverage of essential services.

Responding to a question about the need to meet the target of ending AIDS by 2030 set out in the 2030 Agenda for Sustainable Development, Beg said, "We must do business differently." She said there needed to be increased conversations between national drug control and law enforcement agencies, prison authorities and the justice and health sectors.

Just as importantly, she said, there is a need to "engage with civil societies and communities to make sure that their policies, strategies and practices are harmonized, and based on evidence and human rights."

Invited to discuss UNODC's added value, Beg said "UNODC is a natural and trusted partner of the drug control and law enforcement agencies, prison authorities and the justice and health sectors."

She said it was for this reason that UNODC, in 1999, was invited to join the UNAIDS family, as a cosponsor, to lead the HIV prevention and treatment response for people who use drugs and people in prisons.

"All of these factor puts UNODC in a favourable position to support member states and civil society organizations to address HIV as it relates to drug use and in prisons," said Beg.