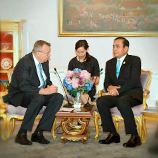 12 December 2018 - Yury Fedotov, the Executive Director of the UN Office on Drugs and Crime (UNODC), concluding his visit to Southeast Asia today, highlighted the importance of tackling threats posed by drugs, crime, corruption and terrorism to promote security and prosperity in the ASEAN region.

Mr. Fedotov met Prime Minister of Thailand Prayut Chan-o-cha, Deputy Prime Minister and Justice Minister Prajin Juntong and other Thai officials to discuss UNODC cooperation through its Regional Office in Bangkok, including to support Thailand's chairmanship of ASEAN next year.

"Thailand's 2019 chairmanship is an opportunity to renew cooperation against crime, terrorism and other threats - a critical challenge for the ASEAN community if the region wants to promote security and prosperity for its nearly 650 million citizens," he said. "UNODC remains engaged in supporting ASEAN in its priorities and to achieve the Sustainable Development Goals, and will help Thailand to advance regional border management plans and liaison offices as a solution to transnational crime and trafficking."

During his visit to the region, the Executive Director joined the Emir of Qatar Sheikh Tamim Bin Hamad Al Thani and Malaysian Prime Minister Mahathir Mohamad in Kuala Lumpur to present the 2018 International Anti-Corruption Excellence Awards.

While in Malaysia, he also met Minister Liew Vui Keong and signed a memorandum of understanding with the Secretary General of the Asian Football Confederation Windsor Paul John to prevent and combat match-fixing and corruption in sport.

Mr. Fedotov also met with the Executive Secretary of the UN Economic and Social Commission for Asia and the Pacific (UN ESCAP) Armida Salsiah Alisjahbana to discuss UN development system reform and the partnership of UNODC and UN ESCAP to support ASEAN and advance the SDGs in the Asia-Pacific region.