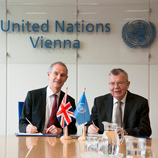 10 December 2018 - The United Kingdom and UNODC have signed two new funding agreements with a joint worth of GBP 9.1 million (almost US$ 12 million) to strengthen UNODC's anti-corruption activities.

A GBP 7.6 million grant will support the fast-tracking of implementation of the United Nations Convention Against Corruption, while a GBP 1.5 million grant will fund investigations linked to wildlife and forestry crime to identify corruption.

UNODC's Executive Director Yury Fedotov expressed his appreciation for the support provided by the Government of the UK, saying: "Thanks to these contributions, UNODC will be able to further advance its work to support anti-corruption action, which is essential to preventing and addressing root causes of conflict and violent extremism, promoting sustainable development and protecting human rights. It will also help us to target the corruption facilitating wildlife and forestry crime."

Leigh Turner, UK Permanent Representative to the United Nations in Vienna, said he hoped that, "by disincentivising corruption, designing out opportunities for corruption and recovering illegally gained assets, it will make it riskier for corrupt politicians and officials to take bribes; make it easier to catch them when they do; and so help to reduce corruption, worldwide - benefiting all of us."

The three-year GBP 7.6 million grant is to support the operation of four regional platforms in South-East Asia, Eastern Africa, South America and Southern Africa that will enable States parties to the United Nations Convention against Corruption to accelerate the Convention's implementation.

The three-year GBP 1.5 million grant will fund financial investigations that are linked to wildlife and forestry crime. The grant is to stimulate the investigation and prosecution of cases that target the financial beneficiaries and corrupt facilitators of wildlife crime, as such investigations are still very rare.