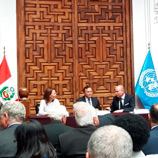 13 December 2018 - The United Nations Office on Drugs and Crime (UNODC) gathered over 80 experts from almost 40 countries specialized in investigating and prosecuting corruption involving vast quantities of assets at a global Expert Group Meeting in Lima, Peru, from 3 to 5 December 2018. Participants identified best practices, shared lessons learned and discussed the impact these cases have on peace and security, human rights and the environment.

Experts shared their experiences from cases all over the world, often involving politically exposed persons as well as assets whose monetary value runs in the millions, sometimes even in the billions of US dollars. Néstor Popolizio Bardales, Minister of Foreign Affairs of Peru, highlighted how "it is increasingly clearer that transnational corruption networks have become a global threat. Multilateral cooperation has become a necessary tool to confront such a threat that has no regard for national borders."

Marianne Hagen, State Secretary at the Ministry of Foreign Affairs of Norway, referred to large-scale corruption as "the most serious form of corruption" and experts described the devastating impact it has on countries. Often resources needed for vital public services such as security, healthcare, or education, are depleted through acts of corruption. The money is laundered through opaque corporate structures and offshore banking systems before being used to acquire luxury goods such as yachts, private jets and premium real estate and finance political ambitions.

Participants were particularly concerned about the frequent harassment, intimidation, physical attacks and sudden deaths of key witnesses, whistle-blowers and those investigating, prosecuting and adjudicating corruption cases involving vast quantities of assets. Many experts shared personal experiences of being threatened in the course of investigations they conducted.

In their outcome document, the Lima Statement, the experts address the difficulty in investigating and prosecuting these cases and in recovering the stolen assets. They agreed on possible methods to tackle the impunity that persists in many cases despite increased enforcement efforts. The experts also emphasized the need for stronger protection of those involved in investigating and prosecuting sensitive cases, as well as of whistle-blowers, witnesses and investigative journalists.

UNODC Resident Representative Kristian Hoelge thanked host countries Peru and Norway for recognizing "the complexity of the issue, its poignancy, its importance and the need to address it, together as a community".

Finally, Néstor Popolizio Bardales, Minister of Foreign Affairs of Peru, recalled that the United Nations General Assembly recently unanimously adopted a resolution tabled by Peru and Colombia to convene a General Assembly Special Session in the first half of 2021 devoted to the fight against corruption.