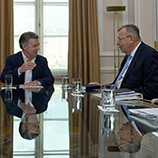 In November, Colombia and UNODC signed an historic project agreement, valued at around US$315 million, to monitor the country's policy to reduce illicit crops and strengthen rural development, in support of the peace process with the FARC. It is the biggest UN project in Colombia as well as the largest in UNODC history.

"My visit to Colombia is an important opportunity to see the work UNODC is doing on the ground, and to discuss what needs to be done going forward. We are committed to cooperating closely with our Colombian partners to promote sustainable development and ensure that illicit drugs cannot act as a spoiler to a hard-won peace," said Mr. Fedotov.

"I expressed once again to President Santos my congratulations to the people and institutions of Colombia for their extraordinary steps towards securing the peaceful future of this country. Much hard work remains to be done, but be assured that Colombia has a steadfast partner in UNODC."

The Executive Director also met Jean Arnault, Special Representative of the Secretary-General and Head of the UN Verification Mission in Colombia, and Martín Santiago, Resident Coordinator of the UN in Colombia.

Along with High-Commissioner Pardo, Mr. Fedotov inaugurated yesterday the new premises of the UNODC Office in Colombia, which is the biggest UNODC field presence in the world.

Today, the Executive Director visited UNODC alternative development programme sites to see first-hand the work being done to support rural livelihoods free from illicit drugs. He was in three locations in the department of Meta, to the east of the Andean mountains. There, Mr. Fedotov met local officials and leaders of the National Integrated Programme for the Substitution of Illegal Crops.

Alternative development to enable rural communities involved in illicit crops cultivation aims at breaking the vicious circle of poverty, underdevelopment and insecurity by combining alternative licit economic activities with social development and promotion of the rule of law. It represents a fundamental pillar of a balanced international drug control strategy.

The comprehensive alternative development project in Colombia encompasses financial support for voluntary coca eradication, land titling and creation of farmers associations, as well as infrastructural initiatives such as improved road access, creation of local markets and commercialization of alternative products.