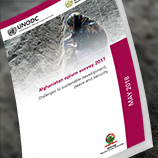 According to the latest survey report released today by UNODC, last year's record levels of production has led to unprecedented levels of potential heroin production. From the 2017 opium harvest, some 550-900 tons of heroin of export quality (purity between 50 and 70 per cent) can be produced.

The report highlights that the levels of opium poppy cultivation create multiple challenges for the country, its neighbours and the many other countries that are transit for or destination of Afghan opiates. The significant levels of opium poppy cultivation and illicit trafficking of opiates further fuel instability, insurgency and increase funding to terrorist groups in Afghanistan.

The report revealed that the record high production of opium in Afghanistan led to a rapid expansion of the illegal economy in 2017. Being worth between US$ 4.1 to 6.6 billion in 2017, or 20 and 32 per cent of GDP, the value of opiate economy exceeded by far the value of Afghanistan's licit exports of goods and services in 2016 (7 per cent of GDP).

With that, opium poppy has become a crucial component of the Afghan economy that secures the livelihoods of many Afghans who engage in cultivation, work on poppy fields or partake in the illicit drug trade. In rural areas, a considerable share of the population was affected and potentially profited from opium poppy cultivation. In the Western and Northern regions, farmers cultivated poppy in more than a third of the villages; in the Eastern region in more than 50 per cent and in the Southern region in almost 85 per cent of villages. In addition to farming households, opium provides access to daily wage labour to a large number of local and migrant workers hired by farmers. In 2017, opium poppy weeding and harvesting provided the equivalent of up to 354,000 full time jobs to rural areas.

According to the same report, opiates have created an illegal economy that has permeated the rural society to the extent that many communities - not only farmers - have become dependent on the income from opium poppy to sustain their livelihoods. The income from opium poppy helps Afghanistan and its impoverished rural population to cope with its economic and social challenges. This comes at a cost, as the illicit economy discourages private and public investment by fuelling insecurity, violence and insurgency.

The survey results found a clear and well-established link between lack of government control, insecurity and increased opium poppy cultivation. Lack of governmental presence and security are driving factors for opium cultivation and opium cultivation further destabilizes the country by funding insurgency and anti-government groups. The Ministry of Counter-Narcotics (MCN)/UNODC estimated that in 2017, insurgency groups, including the Taliban, accrued a minimum of US$ 116 - 184 million from taxing the opiate production in Afghanistan.

Due to the scale and the complexity of the drug problem, the reduction of illicit crop cultivation depends on the achievement of broader development goals, such as well-established and strong state institutions for effective governance, and functioning social protection mechanisms, which call for a strong representation of counter-narcotics in the development strategy for Afghanistan. The diversity of conditions and factors associated with development and opium poppy cultivation need to be acknowledged and taken into account in the elaboration of effective drug control strategies.

The report concluded that addressing the opiate problem in Afghanistan remains a shared responsibility. Only a small share of the revenues generated by the cultivation and trafficking of Afghan opiates reaches Afghan drug trafficking groups. Many more billions of dollars are made from trafficking opiates into major consumer markets, mainly in Europe and Asia. Reducing the Afghan opium production requires an international approach that targets the supply chain of opiates along all its stages, from source to destination.