UNODC and Egypt sign agreement to strengthen cooperation against crime 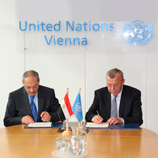 The United Nations Office on Drugs and Crime signed a Memorandum of Understanding with the Prosecutor General of Egypt on the margins of the ninth Conference of the Parties to the United Nations Convention on Transnational Organized Crime, reflecting the long-standing partnership aimed at strengthening Egypt's criminal justice system.

The Memorandum of Understanding (MoU), signed on 15 October, provides a framework that will further facilitate cooperation and collaboration to better combat criminal threats. It will allow for criminal justice responses to crimes related to terrorism, trafficking in persons, smuggling of migrants, or illicit trafficking including cultural property and drug crimes and cybercrime, among others, while protecting the rights of victims and witnesses. In addition, it promotes early access to legal aid, alternatives to imprisonment, justice for children, and preventing and responding to violence against children, as well as strengthening of regional and international cooperation in criminal matters.

Speaking at the signing ceremony, UNODC Executive Director Yury Fedotov said, "Cooperation with the Public Prosecution Office is important in UNODC's overall engagement with the Government of Egypt."

"Enhancing cooperation among Prosecutors especially between Africa and Europe is important in addressing issues related to human trafficking and migrant smuggling as well as on the proceeds of crime," he added.

Egypt's Prosecutor General Nabeel Sadek welcomed the signing of the MoU and described it as another significant step towards consolidating the successful partnership with UNODC. He expressed Egypt's hope to have the Memorandum of Understanding serve as a framework for further enhancing international cooperation in criminal matters, combatting transnational organized crime and its associated illicit financial flows.

UNODC has been providing support to the Egyptian Public Prosecution Office enhancing its capacities in areas of mutual interest including corruption, financial investigation and money laundering cases, or combating violence against women in addition to investigation in the trafficking in persons and migrant smuggling cases.