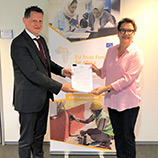 1 August 2019  - The European Union and the United Nations Office on Drugs and Crime (UNODC) Regional Office for the Middle East and North Africa have launched a three-year project aimed at supporting Egypt, Libya, Morocco and Tunisia in dismantling migrant smuggling and human trafficking criminal networks operating in North Africa.

Trafficking in persons is the acquisition of people by improper means such as force, fraud or deception, with the aim of exploiting them. Smuggling of migrants involves the procurement for financial or other material benefit of illegal entry of a person into a State of which that person is not a national or resident.

In doing so, UNODC and the European Union, in close partnership with the governments of North Africa, will help prevent and combat migrant smuggling and human trafficking in the region, thereby putting an end to the horrific exploitations and violations to which refugees and migrants are exposed.