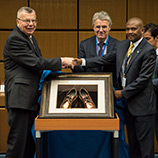 Vienna, 30 January 2019 - The Vienna-based Group of Friends of the United Nations Standard Minimum Rules for the Treatment of Prisoners, also known as the Nelson Mandela Rules, co-chaired by Germany and South Africa, convened for a special meeting on Monday, 28 January to renew its commitment to the practical application of the Rules and the work of the United Nations Office on Drugs and Crime (UNODC) in the field of prison reform.

Attended by delegations from more than 40 Member States, the meeting opened with the official hand-over of a memorable gift from South Africa to UNODC -a replica of the shoes which Nelson Mandela wore on the day of his release from Victor Verster prison in February 1990. Ambassador Tebogo Seokolo recalled that South Africa had deliberately chosen what has become Drankestein Correctional Centre as the location where it held its national launch of the Nelson Mandel Rules in July 2018.

The token of appreciation resonates with Nelson Mandela's autobiography entitled "Long walk to Freedom" as well as the UN General Assembly decision to also celebrate Nelson Mandela International Day (18 July) to promote humane prison conditions, to raise awareness of prisoners being a continuous part of society, and to value the work of prison staff as an important social service.

Mr. Yury Fedotov, Executive Director of UNODC, commended the Group of Friends for its important work and reiterated that the humane custody of offenders was fundamental from a human rights perspective and to maintain social cohesion at large: "We must seek to carry on the legacy of Nelson Mandela to address the plight of an otherwise forgotten population behind bars, to protect human rights and to promote public safety."

Recalling that the Nelson Mandela Rules reflected the minimum requirements to be met by a humane prison system today, German Ambassador Gerhard Küntzle encouraged further Member states to join the Group, and reminded participants of the need to now move from words to action: "To this end, the rules must be transposed into national law and finally into actual prison practice."

Delegations from Afghanistan, Algeria, Argentina, Canada, the Dominican Republic, El Salvador, Finland, Italy, Mexico, the State of Palestine, Switzerland and Thailand took the floor to report on prison reform initiatives in their countries, including legislative amendments to bring prison laws in line with the Mandela Rules. Frequent reference was made to the constructive cooperation with UNODC, including the actual use of its guidance material, such as its Checklist on Assessing Compliance with the Nelson Mandela Rules and its Roadmap for the Development of Prison-based Rehabilitation Programmes.

Philipp Meissner, prison reform focal point in UNODC's Justice Section, reported on its Global Programme on Addressing Prison Challenges, which assists Member States in reducing the scope of imprisonment, in improving prison management and conditions, and in supporting the social reintegration of offenders. Particular attention was given to UNODC's up-coming e-learning course on the Nelson Mandela Rules, which will include inter-active videos filmed in Algerian, Argentinian and Swiss prisons. "The scenarios in the course not always lend themselves to a straightforward response - a deliberate choice to give justice to the difficult decisions prison staff need to take on a daily basis."

On behalf of UNODC's Drug Prevention and Health Branch, Ehab Salah shared UNODC's work on the specific issue of addressing HIV in prison settings, including through an up-coming Technical Guide on the Prevention of Mother-to-Child Transmission in prisons.

The Group of Friends concluded its meeting by announcing its intention to convene a side event on prison staff training during the 28 th session of the Commission on Crime Prevention and Criminal Justice taking place from 20 to 24 May 2019 in Vienna - an event to coincide with the launch of UNODC's e-learning course on the Nelson Mandela Rules.

Roadmap on the Development of Prison-based Rehabilitation Programmes