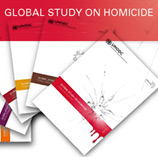 8 July 2019 - Some 464,000 people across the world were killed in homicides in 2017, surpassing by far the 89,000 killed in armed conflicts in the same period, according to the Global Study on Homicide 2019 published today by the United Nations Office on Drugs and Crime (UNODC).

"The Global Study on Homicide seeks to shed light on gender-related killings, lethal gang violence and other challenges, to support prevention and interventions to bring down homicide rates," said UNODC Executive Director Yury Fedotov. "Countries have committed to targets under the Sustainable Development Goals to reduce all forms of violence and related death rates by 2030. This report offers important examples of effective community-based interventions that have helped to bring about improvements in areas afflicted by violence, gangs and organized crime."

The study shows that the overall number of people who suffered a violent death as a result of homicide increased in the past quarter of a century, from 395,542 in 1992 to 464,000 in 2017. However, because the global population has risen faster than the increase in recorded homicide victims, the overall risk of being killed in homicides has declined steadily. The global homicide rate, measured as the victims of homicide per 100,000 people, declined from 7.2 in 1992, to 6.1 in 2017.

Organized crime responsible for 19 per cent of homicides

Homicide rates vary widely between and within regions

The 2017 average global homicide rate (6.1) masks dramatic regional variations. The rate in the Americas (17.2) was the highest recorded in the region since reliable records began in 1990. Africa's rate (13.0) was also above the global average, whereas the rates in Asia, Europe and Oceania were below the global average (2.3, 3.0 and 2.8 respectively).

Within countries in the Americas, high homicide levels are clustered, with some local populations facing homicide rates comparable to death rates in conflict zones and others having a negligible risk.

Most homicide victims are men, but women more often killed by family and intimate partners

Globally, some 81 per cent of homicide victims recorded in 2017 were men and boys, and more than 90 per cent of suspects in homicide cases were men, according to the most recent estimates. However, the study shows that the gender disparity among victims changes with age.

Girls and boys aged nine and under are killed at roughly equal rates, in marked contrast to all other age groups, in which males make up more than 50 per cent of the victims, according to data from 41 countries.

In all regions, the likelihood of boys becoming victims of homicide increases with age, although this process occurs at different stages. Men and male adolescents aged between 15 and 29 are at the highest risk of homicide globally.

Although women and girls account for a far smaller share of victims of homicide in general than men, they continue to bear by far the greatest burden of intimate partner and family-related homicide.

Tackling the drivers of homicide

Targeted and efficient interventions to counter homicide require a comprehensive understanding of its scale and drivers. The drivers of homicide highlighted in the study include inequality, unemployment, political instability, the prevalence of gender stereotypes in society, and the presence of organized crime.

The study also points to the importance of a governance model centred on the rule of law, control of corruption, and investment in socioeconomic development, including in education, as critical in bringing down the rate of violent crime. Firearms and drugs and alcohol are further facilitators of homicide that need to be addressed, according to the study.

The Global Study on Homicide is available online: https://www.unodc.org/unodc/en/data-and-analysis/global-study-on-homicide.html

It consists of five thematic booklets, each offering an insight into specific facets and dimensions of this complex phenomenon: homicide trends and patterns; drivers, mechanisms and typologies of homicide; homicide and sustainable development; gender-related killing of women and girls; and the killing of children and young adults. An additional sixth booklet consists of the executive summary and policy implications.