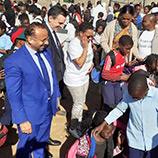 12 July 2019 - Mozambique is increasingly becoming a centre of attention of the United Nations Office on Drugs and Crime's (UNODC) efforts to combat the growing threat of illicit trade on the East African coast. From heroin from West Asia arriving and transiting through the region, to ivory and timber leaving its ports to reach Asian markets, the region is a growing hub with dire consequences to fragile economies.

"Following the powerful tropical cyclones, which struck Mozambique in quick succession this past March and April respectively, terrorist and organized crime groups are taking advantage of the precarious situation for their illicit trade or recruit locals who are desperate to compensate for their losses", warns César Guedes, the newly appointed UNODC Representative in the country.

In the northern part of the country, especially in the Cabo Delgado province, at the border with Tanzania, the situation has been deteriorating at a rapid pace. So-called terrorist groups have since January 2019 increased their intensity of attacks, which left more than a dozen dead in June alone.

In response to these challenges that threaten peace and stability in the country and the wider regional security of the Southern Africa Development Community (SADC) region, UNODC Executive Director Yury Fedotov recently identified Mozambique as a priority country to benefit from the rapid deployment of UNODC surge capacity, including the assignment of Mr. Guedes to coordinate a comprehensive offer of assistance bringing together expertise across UNODC's mandate areas.

And this timely action is already showing encouraging results, which are in line with SDG 16.

UNODC is providing answers to some of the most pressing challenges on border control at sea and by air. In April 2019, UNODC launched its first training on Container Control at sea ports and air cargo. Mozambique is also in the process of establishing a Joint Airport Interdiction Task Force (JAITF) at Maputo international airport, through UNODC's AIRCOP Project, which will increase its ability to detect and intercept drugs, other illicit goods and high-risk passengers, including foreign terrorist fighters.

UNODC's presence was also felt during the World Drug Day on 26 June, where Representative Mr. Guedes co-led a march through the capital alongside government counterparts, civil society organizations and youth groups to deliver a message against drugs while promoting healthy lifestyles, sports and justice.

Ambassador Pedro Comisário, the Head of Mozambique's Central Office for the Prevention and Control of Drugs (Gabinete Central de Prevenção e Combate à Droga) praised UNODC's "timely efforts and presence in the country and reaffirmed his organization's strong willingness to increase cooperation in the future."

"Mozambique is one of the contexts where UNODC's expertise makes a real difference in the international community's efforts to counter global illicit trafficking trends," said Miwa Kato, UNODC Director of the Division for Operations who also noted that "UNODC stands side by side with the Government to provide dedicated support to reinforce the capacity of law enforcement and criminal justice institutions, while at the same time helping and protecting those most affected by drug abuse and HIV/AIDS, especially women and children".

The UN Secretary-General Antonio Guterres visited the affected region last week and mentioned that the UN should spare no efforts in supporting Mozambique in addressing its present challenges, not only on the emergency post disaster assistance front but also into a more resilient pathway for development in the framework of the SDGs.

During his visit, the President of Mozambique Felipe Nyusi acknowledged and thanked the UN Secretary-General for opening a UNODC resident office in the country.