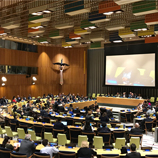 18 June 2019 - The United Nations Office on Drugs and Crime (UNODC), together with Barbados, the Dominican Republic, France, the Netherlands, Peru, Trinidad and Tobago, the United Kingdom and the United States co-organized the first ever Security Council Open Arria-formula meeting on "Transnational Organised Crime and Drug Trafficking in the Caribbean Region as a Threat to International Stability" on 7 June in New York.

Throughout the meeting, panellists and speakers noted that transnational organized crime, including drugs, arms and human trafficking, affects peace, security and stability wherever it occurs. It undermines the authority and effectiveness of State institutions, erodes the rule of law and weakens law enforcement structures.

Speakers highlighted that transnational organized crime and drug trafficking not only constitute a serious challenge to conflict-affected countries, post-conflict situations, and fragile states; it is also a great challenge for small island developing states who are faced with the daily challenge of securing large, porous and remote sea and land borders against flows of illicit drugs, guns and ammunitions, and trafficking in persons and smuggling of migrants.

Jose Vila del Castillo, Representative of the UNODC Regional Office for Central America and the Caribbean noted that "these crimes pose an immediate danger to people's lives and safety, they undermine human rights, hinder sustainable development and, as this Council has recognized, they threaten international peace and security."

He also provided a series of detailed recommendations for Council consideration and action, including on  more effective implementation of the Convention against Transnational Organized Crime and its protocols; promotion of regional prospective analysis of the risk factors that increase transnational organized crime; stronger inter-institutional response teams at land, air and sea border points, to strengthen the capacity for prevention, detection and effective interception of organized; and finally, encourage discussion to identify options for enhancing coordination, as well as recommendations to better prevent and counter transnational maritime crime.