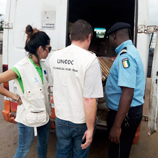 Dakar (Senegal), 17 September 2019 - Law enforcement authorities from Côte d'Ivoire, Mali and Burkina Faso met in Dakar on 4 September to discuss and evaluate results and lessons learned from 'Operation Benkadi', an operation set up by the United Nations Office on Drugs and Crime (UNODC) with the three countries to tackle cross-border crime.

With the aim of strengthening cross-border cooperation and coordination on illicit drug trafficking, the operation was implemented from April to September 2019. In this context Côte d'Ivoire, Mali and Burkina Faso held strategic and operational meetings, specialized trainings for border crossing officers, and simultaneous joint cross-border operations.

Nearly 320 officers from 18 law enforcement agencies participated in the operation, covering 19 land border crossings, focusing on the exchange of information and searching people and vehicles.

The operation resulted in the arrest of 15 people, the identification and rescue of 33 potential child victims of human trafficking for exploitation in gold mines in Mali, and the seizure of 17 kilograms of cannabis, over 1 kilogram of amphetamines, 6.5 tons of fraudulent medicine, 33 sticks of dynamite, 10 detonators, 50 kilograms of explosive wicks, 1 rifle with 789 ammunition, 18 stolen cars and  10 unauthorized military uniforms.

West Africa remains a region vulnerable to many forms of illicit trafficking, including illicit drug trafficking, due to significant security and development challenges. The porous borders facilitate the transnational nature of these crimes and highlight the urgent need for a coordinated and harmonized response between law enforcement agencies.

In response, the ECOWAS Community of West African States and UNODC, as the custodian of the United Nations conventions on drug control and the United Nations Convention against Transnational Organized Crime, jointly launched the "ECOWAS Action Plan on Illicit Drug Trafficking in 2015, related organized crime and drug abuse in West Africa" (fully funded by the European Union) and collaborates with Member States in West Africa to this end. Operation Benkadi, which means "stronger together" in Malenke, is part of this effort.

Cheikh Ousmane Touré, UNODC Crime Prevention and Criminal Justice Officer and project coordinator for the above-mentioned ECOWAS project, said that "we must decompartmentalize and be frank and honest when necessary. It is not a question of uniforms or units, this fight must be coordinated in the same way as Senegal has done, i.e. involve the Police, the Gendarmerie, the Water and Forests and Customs in this work to find a platform for communication and exchange, but also take information at the country level and transmit it at the regional level."