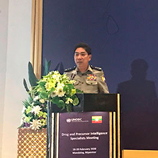 Mandalay (Myanmar), 20 February 2020 - The United Nations Office on Drugs and Crime (UNODC) convened intelligence specialists from East, South and Southeast Asia as well as Australia, Canada and the United States in Mandalay, Myanmar, on 18 February to exchange intelligence on recent precursor diversion and trafficking cases to set the stage for an action plan to disrupt chemical trafficking in the region.

"We are very pleased to have intelligence specialists from across the region here with us and UNODC", remarked Myanmar Pol. Brig. Gen. Win Naing, Commander of the Drug Enforcement Division, of the Myanmar Police Force. He continued: "Disrupting flows of precursor chemicals into the Golden Triangle, and particular into Shan State, is critical not only for Myanmar but also to surrounding countries".

One of the major challenges in the region in precursor control has been a limited exchange of intelligence among countries in the region, resulting in small amounts of precursor seizures, and unsuccessful backtracking investigations into the sources and origins of seized chemicals. "UNODC is pleased to advance the precursor control agenda in the region," said Reiner Pungs, Coordinator for the UNODC Precursor Programme. "There is a lot of room for improvement in intelligence sharing to address trafficking in precursor chemicals as well as laboratory equipment and tools required for the manufacture of illicit drugs - these things have been seriously overlooked in the region and we are pleased to help address this challenge".

Recent synthetic drug seizures clearly demonstrate the intensified scale of trafficking as well as the steady availability of precursor chemicals. There has been a clear consolidation of methamphetamine production as well as other synthetic drugs into areas with governance challenges in parts of Southeast Asia, which provide the environment needed by organized crime groups. "Organized crime groups are innovative and continuously looking for ways to evade law enforcement detection for trafficking in precursor chemicals", said Inshik Sim, UNODC Drug Programme Analyst, adding that "Intelligence sharing is key to respond, as it helps us better anticipate their plans and build strategic and operational responses."

Experts at the meeting shared the view that understanding organized crime groups involved in trafficking in precursor chemicals, their methods and backtracking investigations are necessary to reduce the supply of synthetic drugs. They also agreed to move forward with UNODC in a coordinated way to address trafficking in precursor chemicals and laboratory equipment and that UNODC's regional precursor programme would be central to these efforts.

Click here to learn more about the UNODC SMART Programme