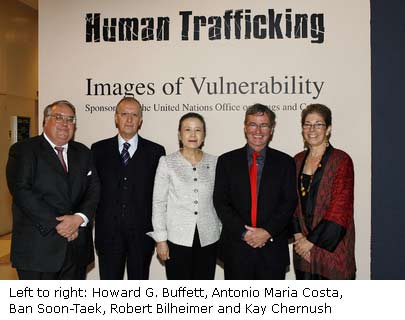 Featuring the photography of special guests Howard G. Buffett, President of the Howard G. Buffett Foundation; Academy Award nominated director Robert Bilheimer; and international photojournalist Kay Chernush , the exhibition will be on display in the UN Visitors Gallery from 29 October through 18 November.

The 55 photos provide a snapshot of the worldwide problem of human trafficking. "These pictures are a dramatic representation of a crime that shames us all. Art is a powerful advocacy tool to motivate people to take action, especially in the defense of women and children", Mr. Costa notes.

UNODC is the lead UN agency fighting human trafficking as a crime and the guardian of the UN Convention Against Transnational Organized Crime and its associated Protocol to Prevent, Suppress and Punish Trafficking in Persons.

UNODC works with governments, the private sector and NGOs to combat this modern form of slavery by raising public awareness, engaging in preventative activities and enhancing the capacity and skills of criminal justice professionals and policymakers.

Howard G. Buffett currently serves on the Corporate Board of Berkshire Hathaway, Inc., and has been active in business, politics, photography, agriculture, conservation, and philanthropy. He spends the majority of his time operating the Howard G. Buffett Foundation that supports humanitarian initiatives.  Mr. Buffett, who has traveled extensively and authored six books documenting wildlife and the human condition, received the Aztec Eagle Award from the President of Mexico, the highest honor bestowed on a foreign citizen, and the Will Owen Jones Distinguished Journalist of the Year Award from the University of Nebraska

Kay Chernush is an internationally recognized photographer with more than 25 years experience in commercial and fine art photography. She has photographed more than 50 feature stories for Smithsonian Magazine and shoots for many other national publications. In 2005 she was commissioned by the U.S. State Department to document human trafficking.

Robert Bilheimer is a director, writer and producer with an international background in film and journalism.  He received an Academy Award nomination for "Cry Reason", a documentary focusing on the South African anti-apartheid leader Beyers Naude, and is best known for "A Closer Walk", the critically acclaimed documentary film about the AIDS epidemic. He is currently producing and directing "Not My Life", a documentary film that comprehensively depict the global afflictions of modern-day slavery and human trafficking.