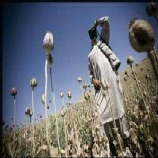 16 November - In its final Afghan Opium Survey for 2007 issued today,   the United Nations Office on Drugs and Crime (UNODC) shows that opium is now equivalent to more than half (53%) of the country's licit GDP. Speaking at a conference in Brussels on the future of Afghanistan, hosted by Princeton University, the Executive Director of UNODC, Antonio Maria Costa, announced that the total export value of opiates produced in and trafficked from Afghanistan in 2007 is about $4 billion, a 29 per cent increase over 2006.

Approximately one quarter of this amount ($1 billion) is earned by opium farmers. District officials take a percentage through a tax on crops (known as "ushr"). Insurgents and warlords control the business of producing and distributing the drugs. The rest is made by drug traffickers.

While opium has a significant impact on the Afghan economy, massive profits are made abroad through its export as its value increases with every border crossing. The wholesale price of a gram of heroin is, on average, $2.50 in Afghanistan, $3.50 in Pakistan and Iran, $8 in Turkey, $12 in Albania, $18 in Slovenia or Slovakia, $22 in Germany, $30 in the United Kingdom, and $33 in Russia. Retail prices can be up to ten times as high as wholesale prices, also because of "cutting" that mixes the drug with other substances.

Considering that more than 660 tons of heroin and morphine are being exported from Afghanistan in 2007 (or have been stored for future export), "the potential windfall for criminals, insurgents and terrorists is staggering and runs into the hundreds of millions of dollars" warned Mr. Costa. He urged Afghanistan and its supporters to take more energetic measures to promote security, development and clean government.

Mr. Costa urged NATO to take a more active role in counter-narcotics. "Since drugs are funding the insurgency, NATO has a self-interest in supporting Afghan forces in destroying drug labs, markets and convoys. Destroy the drug trade and you cut off the Taliban's main funding source", said the UN's drug chief. 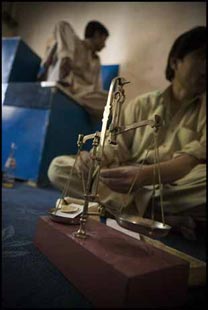 He also made a plea to governments to help the United Nations Security Council to list major drug traffickers involved in the Afghan opium trade (in line with Resolution 1735). "The Security Council has taken the initiative. It's high time for Member States to bring these most wanted criminals to justice", said Mr. Costa.

Given the major increase in supply of Afghan opium in 2007, UNODC has observed a proliferation of heroin labs in neighbouring countries and along trafficking routes. These labs are dependent on precursor chemicals, like acetic anhydride, that are smuggled. "There must be more stringent controls in chemical producing countries, better regulation of precursor shipments to prevent their diversion, and targeted operations in and around Afghanistan to seize illegal imports", said the UN drugs head.

He also urged stronger intelligence sharing between Afghanistan and its neighbours and among the countries of Central Asia. "Drug trafficking is a trans-national threat and therefore national initiatives have their limitations", said Mr. Costa.

Stressing the imperative for more development assistance to Afghanistan (one of the poorest countries in the world), he highlighted his Office's increased cooperation with the World Bank and World Food Programme to encourage sustainable development of licit livelihoods. He also underlined UNODC's commitment to strengthening the Afghan justice system, particularly in the areas of counter narcotics and anti-corruption.

"Time is not on our side. Either we sow the seeds of security and development now, or the Taliban will reap its deadly harvest in the future", warned Mr. Costa.