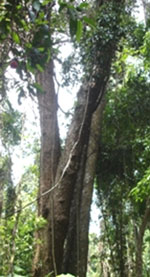 3 October 2008 - Safrole Rich Oil (SRO) is a natural substance that can be used in the production of ecstasy. In Cambodia, where safrole is harvested, weak regulatory and control systems are making it hard to control SRO production and trade.

SRO is extracted from over 360 tree species in South-East Asia. The essential oil is obtained from tree trunks, roots, bark, branches and leaves, and is used legitimately in the fragrance and insecticide industries. In Cambodia, SRO is extracted from the tree locally known as Mreas Prov Phnom, which grows in the west of the country.

In many countries in South-East Asia, safrole production and trade is legal for commercial purposes. This was also the case in Cambodia until last year, when the government prohibited the production, import, or export of SRO to prevent its use as an ecstasy raw material. In 2004, the government also classified Mreas Prov Phnom trees as a rare species under the Forestry Law, making all harvesting illegal. Despite these efforts, illegal production and trade has been growing.

The Cambodian government is committed to addressing the issue and UNODC is working with the National Authority for Combating Drugs to control SRO. "We have helped develop guidelines for governments in the region to work together to prevent SRO illegal production, sale, distribution, storage and trade," says Lars Pedersen, UNODC Project Coordinator in Cambodia. Still, more resources are needed.

According to the 1988 UN Convention against Illicit Traffic in Narcotic Drugs and Psychotropic Substances, to which Cambodia is a party, it is unlawful for anyone to possess or distribute safrole knowing, or having reason to believe, that it will be used to manufacture illicit drugs like ecstasy.

SRO extraction takes place in makeshift distilleries deep in the forests of  western Cambodia. Large amounts of fuel wood are needed, which together with the felling of Mreas Prov Phnom trees result in deforestation. When one area is depleted, distillation moves elsewhere.

Producers sell the oil at around US$ 4 per liter. In the capital Phnom Penh, however, the price is US$30 per liter. From Cambodia it is primarily smuggled to Viet Nam and Thailand, and then on to countries such as China and the USA.

"In late 2007, more than 50 tons of SRO were seized at Laem Chabang port in Thailand. The shipment was destined for China and the USA. Synthesized with other chemicals, the safrole could have been used to make about 7.5 million ecstasy pills, with a street value of about US$ 150 million," says Pedersen.