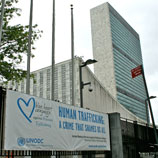 11 May 2009 - The United Nations is calling for collective action to end human trafficking, with proposals to scale up efforts to a global level. At the same time, art takes centre stage as a goodwill ambassador, the first time an artist is bestowed with the honour, is appointed to spearhead the campaign against human trafficking.

On 12 May, acclaimed painter Ross Bleckner of the United States will be appointed UNODC goodwill ambassador to combat human trafficking. The induction ceremony will take place on the occasion of the opening of "Welcome to Gulu", an exhibition curated by Bleckner on behalf of UNODC and the International Criminal Court's Trust Fund for Victims. The exhibition includes 200 paintings created by former child soldiers and abducted girls from Gulu, Uganda. Proceeds raised by the sale of the children's paintings, as well as portraits taken by Bleckner, will benefit former child soldiers and abducted girls.

Antonio Maria Costa, the Executive Director of UNODC, says: "Art is one of the most powerful advocacy tools to raise awareness and move people to take action. A painting says a thousand words. Appointing Ross Bleckner as a UNODC goodwill ambassador, and opening this exhibition at the UN, provides a unique opportunity to implore others to join us in our fight against conscription of children, and other forms of human trafficking and modern day slavery. We know that Ross' extraordinary commitment to the plight of trafficking victims will move people to take action against modern day slavery."

On 13 May, the President of the sixty-third session of the General Assembly, Miguel d'Escoto Brockmann, will convene an interactive thematic dialogue between Member States based on a paper by Secretary-General Ban Ki-Moon called "Improving the coordination of efforts against trafficking in persons".

The thematic dialogue, titled "Taking collective action to end human trafficking", will focus on recent calls to establish a global plan of action to combat human trafficking. Panels will examine the regional initiatives already underway and the proposals for scaling up efforts to a global level. Panelists will also offer recommendations for more effective action by Member States, the United Nations system and civil society.

Over the last few years, the General Assembly has placed great emphasis on the topic of trafficking in persons and significant efforts have been made in establishing legal and institutional mechanisms to address this crime. Major progress has been made since the United Nations Trafficking in Persons Protocol entered into force in 2003, but many countries still lack anti-trafficking laws.

UNODC is the lead United Nations agency fighting all forms of human trafficking including: child soldiers, sex slaves, forced labor, illegal adoption and illegal organ transfers. It works with governments, non-governmental organizations, the private sector, foundations, the arts and media community, academia and think-tanks to combat this crime by raising public awareness, engaging in preventive efforts and enhancing the capacity and skills of criminal justice professionals and policymakers.

Costa's Corner: descent into the heart of darkness