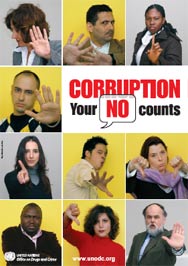 7 December - The International Anti-Corruption Day is marked across the world on 9 December. UNODC is launching a powerful campaign to call on people to take a positive and pro-active stance against this pervasive crime.

Attitudes on corruption are changing. As recently as ten years ago, corruption was only whispered about. Today there are signs of growing intolerance toward corruption and more and more politicians and chief executives are being tried and convicted.

The UN Convention against Corruption - which entered into force in December 2005 - is both a cause and an effect of this trend. Its provisions are the most comprehensive, universal and even-handed measures for tackling this global challenge. The Convention subjects all the State Parties to the same scrutiny and sets clear rules to be applied equally to all.

The aim of UNODC's "Act Against Corruption" Campaign, which will run for two years, is to support a pro-active stance against corruption, promoting the UN Convention as the key tool to fight corruption worldwide and as the impetus for a global and forceful movement.

As part of the campaign, UNODC has produced a Public Service Announcement video spot to illustrate that people are not simply at the mercy of corruption, and often have the power to say NO. View the video spot. Interested broadcasters can obtain a copy by sending us a message. More campaign material - posters, leaflets, logos and audio - is also available.